There’s one mighty woman, Helen Wilmot, behind one big project – the building of the new Stanford Hospital 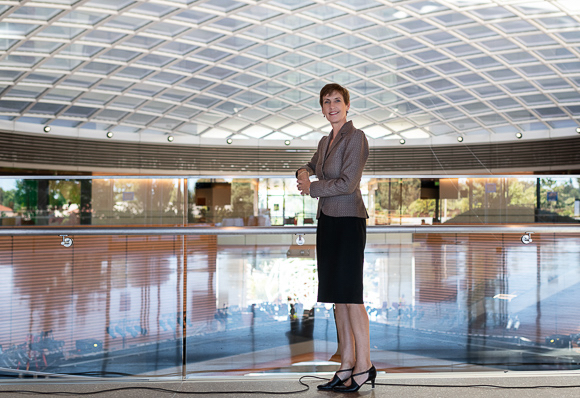 Each workday morning Helen Wilmot hops on her bike and leaves her central Menlo Park home to make the short journey across the creek to her office at the Stanford Medical Center where, since 2012, she’s been Vice President of Facilities, Services and Planning.

It is Helen who oversaw the building of the new 824,000-square-foot hospital that broke ground on May 1, 2013, and will become fully operational later this Fall.

This weekend, Sept. 14 and 15, locals are invited to a sneak peek at a community open house. The two-day event features a health and wellness-inspired street fair with food trucks and family activities. Attendees will also have the chance to view the Stanford VOICES digital mural project, a mosaic of more than 4,000 drawings completed by patients, staff and community members.

Helen wears so many hats at the Med Center that it makes one wonder if she’s able to magically duplicate herself — if not triplicate! Along with the construction of the new hospital, she’s in charge of the children’s and adult healthcare systems, imaging centers, outpatient centers, physician and clinical offices, administrative buildings, and a call center that receives upwards of 15,000 calls a day. 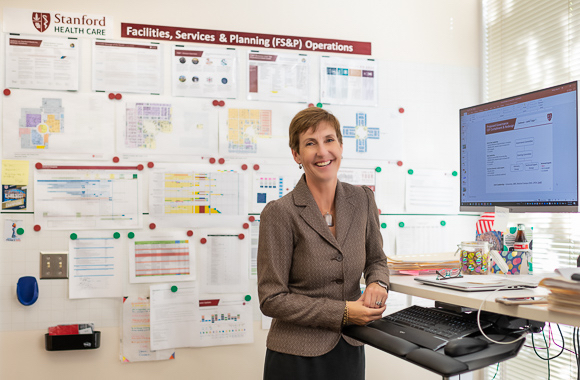 Stanford has been part of her life for much of her life. She came to the United States from Ireland when she was 12; her father had been recruited to work at The Farm. She detoured a bit, becoming a nurse after her undergraduate years, but soon enrolled in the UCLA Anderson School of Management where she earned an MBA.

“After I graduated, I knew I wanted to stay in healthcare, but I gravitated to the administrative side rather than the clinical,” she said. “It’s been beneficial. My range is more robust because I know the clinical side.”

Overseeing the building of the new hospital is a mammoth project, but one that Helen appears energized by. While she didn’t do it alone — hundreds of people contributed in one way or another — the respect from her colleagues is evident when walking around the new hospital grounds.

When its first patients arrive sometime in November, Helen is first to admit that neighboring communities will see an impact, specifically as it relates to traffic.

“I’m in charge of Traffic Demand Management and am in the process of hiring new staff and exploring a variety of options,” she said. “For example, we’ve leased another parking lot on the other side of the Dumbarton Bridge as a park and ride site. And we’re using Scoop, an app that helps people explore carpool options.”

She’s quick to point out the many upsides as well and is hopeful that people will take advantage of the many resources that are part of the new hospital that go beyond patient care. “We want the community to engage with us at different events,” she said. “Not only is there an expanded health resource center on the third floor that’s open to the public and a planned speaker series, there are outdoor spaces, including five gardens with walking paths that people can enjoy.”

The community open house will run 9:00 am to 5:00 pm on Saturday, Sept. 14, and 9:00 am to 3:00 pm on Sunday, Sept. 15. It’s free and open to the public, but pre-registration is required. Sign up online. Free parking is available at the Stock Farm Parking Garage, with shuttle access to the hospital entrance.

Footnote: Handling her multiple hospital responsibilities was not the only thing that required juggling this past summer. Helen’s 20-year-old daughter, Tierna Davidson, was the youngest member of the Women’s World Cup soccer team. “My husband was there for all the games, and I went back and forth a few times,” she said.

Photos by Irene Searles (c) 2019; top photo was taken in the Terry and John Levin Atrium and the second photo shows Helen’s office with its busy white board.