Rather than attending their regular high school classes on Wednesday, October 23, an eclectic group of students gathered at the Menlo School campus for the 1Bay youth action summit. Joined by teachers and parent volunteers, the event focused on inspiring change and making “real plans for real action for real impacts on whatever issue matters to you.” This included a plethora of social justice issues, from gun violence to the achievement gap in education systems to prison reform and many more.

Organized by Chris Young, Menlo’s Director of Community Engagement, the summit attracted about 125 people from high schools from the Peninsula, East Bay, and San Jose. Menlo-Atherton had about 12 students, as well as Andy Stuart and Garrett Jensen, representing the Service Learning Center and other social justice clubs. (Top photo: Young and Stuart with Menlo and M-A students) 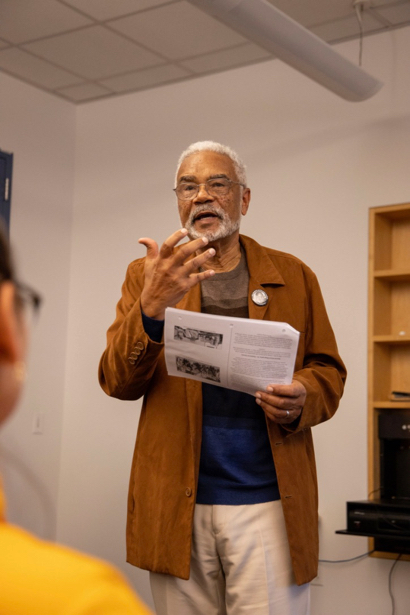 The day began with students getting to know each other, which quickly transitioned into critical conversations about different social justice issues. Keynote speaker, Pastor Michael McBride, gave a talk pertaining to the power of the youth voice and the potential for change. He was followed by Dr. Clayborne Carson (pictured right), director of the Martin Luther King, Jr,  Research and Education Institute at Stanford University, who lead a discussion and Q&A about the civil rights movement being much more than just Dr. King.

An activism fair followed, featuring Menlo Park’s own SafeSpace and other local organizations for change. Students could access a multitude of resources, become involved in their community, and even register to vote!

The energy throughout was undeniably potent. The potential for change rang through the air and seemed to be contagious among the  students. “There is definitely an energy in the air, and I hope that will continue in time,” said Young.

The day was devoted to not only talking about these issues, but also making a plan for action in order to continue the effort for change. Young often chanted, “less talk, more action!” throughout the day.

Keep an eye out in the community for more of a presence from youth organizations and their efforts to organize community effective reform throughout the Bay. This can take many forms, whether it be the next youth organized climate march, or a continued push for gender neutral facilities. Young ended his closing remarks with: “You guys [students] are the leaders of tomorrow.”