Lisa Buda brings a new approach to her dentistry practice 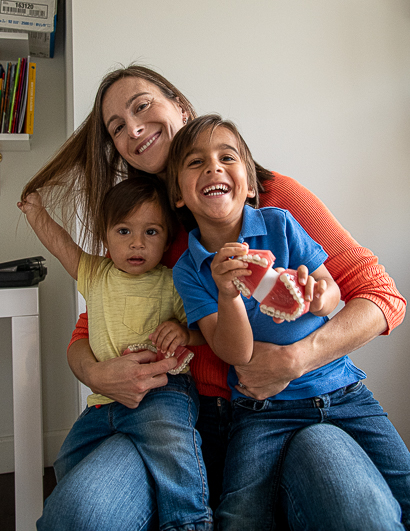 For years, Lisa Buda practiced hospital dentistry in San Francisco, treating people with special needs. “No matter what their disability was, we gave them teeth,” she said.

She was on call for two hospitals and quickly realized that this form of dentistry was not compatible when she become a mom. So when her youngest of two children was three months old, the family moved to Menlo Park.

“I love my neighborhood. It’s exactly what I wanted for my kids,” she says of her circular street. She soon discovered Cafe Zoe where her son became known as “Dancing’ Max” for his enthusiasm at the Cafe’s music nights.

Determined to not work full time, she struggled to find a practice where she could remain engaged professionally while maintaining an active role in raising her two boys. “I think it’s rare to be able to do that in the Bay Area,” she said.

Her solution was to open an unconventional dental practice offering more convenient Invisalign (tooth straightening) treatment combining in-office visits and video check-ins. Because she shares an office with another dentists and has no staff, she can offer Invisalign at a lower than average cost.

“After working in several high-end practices where I did the same treatment for so much more, it feels great to help patients make it work financially,” she said.

She’s given the practice a clever name — Dentistry Unwired — and is looking forward to what she says is the best part of being a dentist, meeting so many different types of people.

“And the really nice part of what I’m doing — other than the chance to spend more time with my kids — is putting some modern ideas into an antiquated profession!”

Is she an orthodontist? It doesn’t say what her qualifications are.

Great ideas!
Being able to combine the care of your children and the work you love
is always a plus.
Good for you, and your family.
All the best!
Colleen