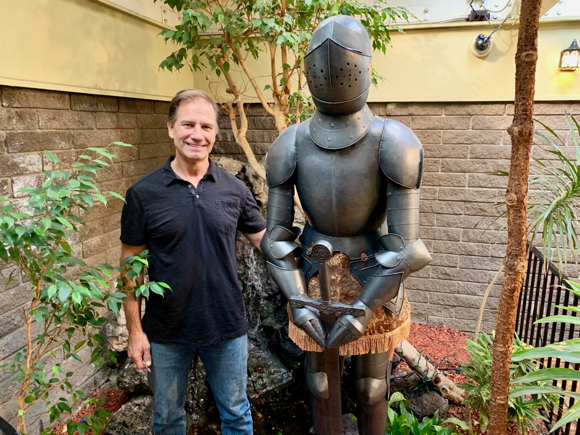 While Round Table Pizza® has more than 440 restaurants across the United States, the only one that really matters to Menlo Park is the location at 1225 El Camino Real.

The very first Round Table was opened by Bill Larson on Dec. 21, 1959, at 1235, now the restaurant’s parking lot, with the simple mission of encouraging customers to “share a little pizza with someone you love.” The current 1225 location was built a few years later. 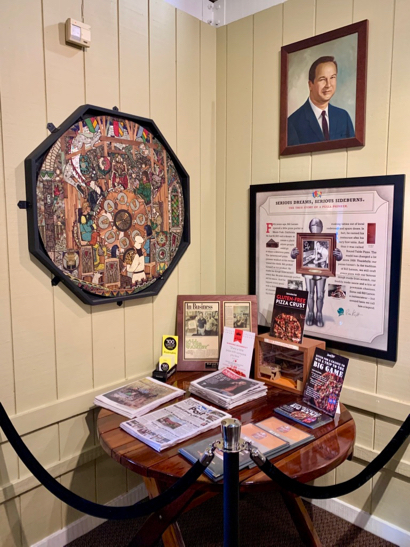 While Round Table is now corporately owned , Bill’s son Bob (pictured top) still operates the franchise in Menlo Park, along with a location in Palo Alto.

“To think that we’ve been around for 60 years speaks to the product,” Bob said. That he’s very familiar with the product is not surprising given that he started working for his father at age 12, becoming full-time at age 17.

“In 1987, my dad gave me the opportunity to buy the Menlo Park location,” he said. “It was not given to me. My dad was a Depression era guy who knew the value of a dollar. 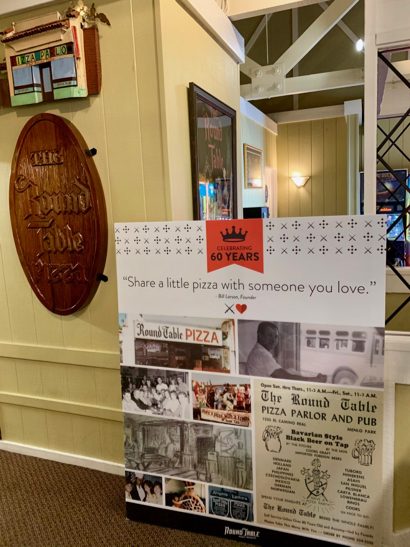 “The price was $350,000 and he gave me five years to pay it off. I worked 60 to 80 hours a week to pay it off earlier and later bought my second restaurant in Palo Alto.”

Bob promises “if you want to taste a real Round Table Pizza, come here.”

On Wednesday, Dec. 11, Round Table will celebrate its 60th anniversary with a special throwback pricing offer: Buy one large pizza at regular price and receive a second one-topping large pizza for the 1959 price of $2.80 from 11:00 am to 10:00pm. Mayor Ray Mueller is scheduled to stop by at 3:00 pm. [Note the anniversary celebration was moved up a couple of weeks so it would not be close to Christmas.]

There are fun memorabilia to see at the Menlo Park location, including one of the original round tables and a knight that oversees the 50-person banquet room. Every decade has a collage of notes and photos along one of the walls.

And of course, there’s the opportunity to taste “the last honest pizza!” plus salute a Menlo Park business that has endured for generations.

A clarification is needed, In 1987 I had two partners when I purchased the Menlo Park Round Table, my sisters Linda and Nikki Larson who were eventually bought out. Linda was instrumental in the purchase of Colorado Ave in 1990 and personally ran the location for many years.

Didn’t Bob race a Corvette in those years or just sponsored one?

I still remember back when they first opened. I was nine years old and stood in front of a large window where an older man with gray hair was tossing a pizza up in the air with his hands. The first time I ever saw that and I was so impressed I remembered it all these years.
Happy 60th ! Glad something of the former wonderful years has remained in Menlo Park. Most everything else is gone.

Round Table is the best pizza around! The Menlo Park location is awesome

While I no longer live in Menlo Park I was there when Round Table Pizza opened and was a constant customer through the sixties and seventies. The pizza was , and I’m sure still is, awesome. I miss it dearly and still remember that scrumptious taste even after all these years.

Congratulation for 60 years of pleasing palates! I wish I could be there to celebrate with you.