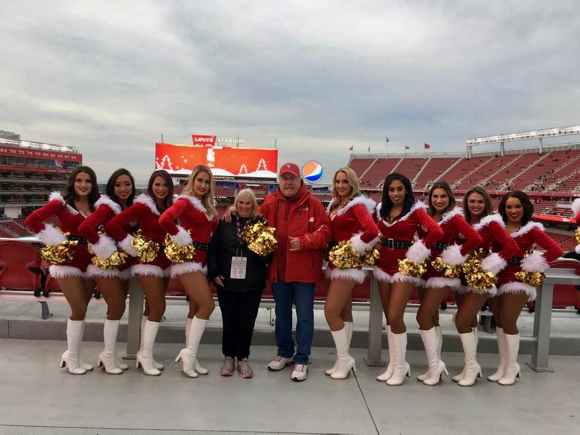 Long-time Menlo Park residents Tana and Bob Budelli are also long-time San Francisco 49er fans. They scored this fun holiday photo with the team’s cheerleaders with a promise to host a Cioppino dinner.

Cioppino, for those who don’t know, is fish stew that originated in San Francisco. Here’s a bit of history according to Wikipedia: “Cioppino was developed in the late 1800s by Italian immigrants who fished off Meiggs Wharf and lived in the North Beach neighborhood of San Francisco, many from the port city of Genoa. When a fisherman came back empty handed, they would walk around with a pot to the other fishermen asking them to chip in whatever they could. What ever ended up in the pot became their Cioppino.”

It’s one of our all time favorite dishes and we were hoping to get a sample along with the cheerleaders. But Bob emailed: “They took a rain check. [Would have been] too many for the dining room. But still got us the pic!”