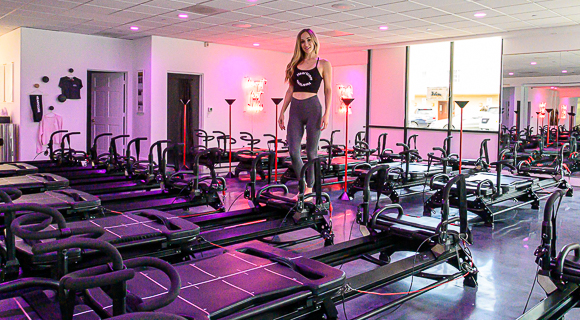 Peninsula native Alisa Scannell spent time in Los Angeles with the hope of getting into acting. She recalls “being surrounded by fitness studios.” But when she hurt her foot she was unable to do many of the high impact workouts she’d enjoyed.

Hollywood dreams abandoned, she was back north and selling solar. “But along the way I had discovered the Megaformer, and I was talking about how great it was to someone who remarked how passionate I was about the workout,” she says. “That was the seed for opening Heartcore, which my Dad, a successful chiropractor, invested in. I’m in business with my two sisters.”

A Megaformer is described as a “Pilates reformer on steroids.” It combines a Pilates workout with cardio and high intensity interval training. “With the bigger machine, there’s a bigger range of motion,” Alisa explains.

“Our modern lifestyle pulls us forward. The machine help you stay upright and gain better core strength. The reason we have core muscles is to protect our spine.”

Alisa had a smaller studio in Menlo Park for two and a half years near the Charisma nail salon on El Camino. She moved to her new open and airy studio on Chestnut Street in late fall, offering about 45 40-minute classes a week. The schedule is online. There are additional studios in Redwood City and San Mateo.

“It’s exciting to be building a community,” she says, “and to bring healing energy to Menlo Park.”