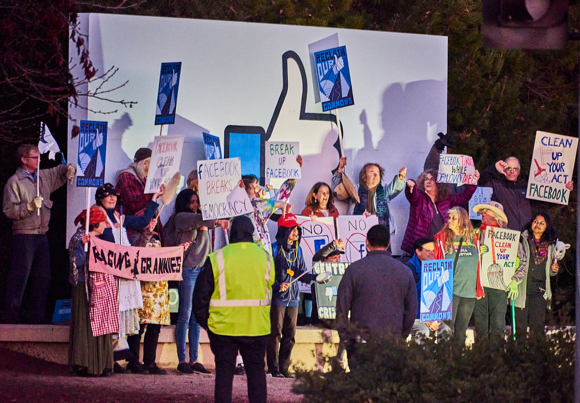 Local members of the Raging Grannies Action League (left in photo) joined with representatives from Media Alliance and Global Exchange in a protest in front of Facebook headquarters in Menlo Park yesterday to call attention to the social media company’s practice of accepting political ads even if they have demonstrably false information in them.

“As culture jammers, Raging Grannies use street theater and other tactics to foster progressive change,” emailed Granny Ruth Robertson. “Some of our actions are pretty spontaneous and low-key like when we decided to dress up as grandmothers in headscarves and aprons busy at the task of cleaning house at [yesterday’s] protest. We waved feather dusters and brooms and carried signs that said ‘Facebook Clean Up Your Act!'”

The action came on the same day the Facebook announced that it was updating its Ad Library to increase the level of transparency it provides for people, giving them more control over the ads they see.

“Ultimately, we don’t think decisions about political ads should be made by private companies, which is why we are arguing for regulation that would apply across the industry,” wrote Rob Leathern, Facebook Director of Product Management in a blog post.

“The Honest Ads Act is a good example — legislation that we endorse and many parts of which we’ve already implemented — and we are engaging with policy makers in the European Union and elsewhere to press the case for regulation too. Frankly, we believe the sooner Facebook and other companies are subject to democratically accountable rules on this the better.

“We recognize this is an issue that has provoked much public discussion — including much criticism of Facebook’s position. We are not deaf to that and will continue to work with regulators and policy makers in our ongoing efforts to help protect elections.”

It has become clear that the Facebook business model, which at first seemed neutral,(if you don’t mind having your data being sold and your friends’ privacy invaded) is actually a very destructive force. In effect, it feeds hatred and divisiveness. If Facebook cannot manage its site better than it has to date, it must get out of the news and political ads business. There is too much at stake.