Yet another band with local roots – R. J. Toast was the name 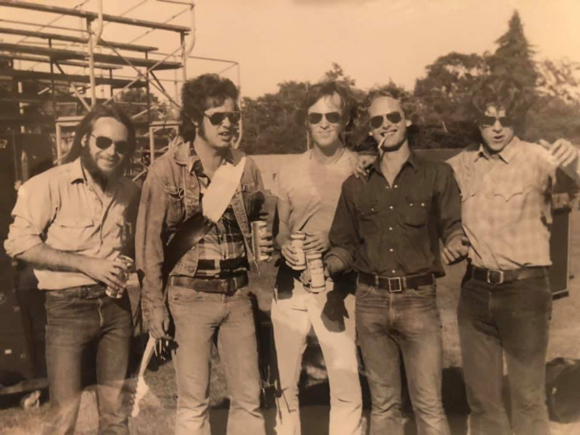 This saga begins with Tim Johnston posting the photo above in the Do You Remember the Old Menlo Park Facebook group. He thought that it may have been taken at M-A.

To which Robert Gunderson responded: “I don’t know where you found the photo, Tim, but it’s from 1972 or ’73 at the Menlo College football field. I had a camera with me, and the photo was taken by Dan Heron (former drummer of The New Invaders) who lived nearby.

Left to right is Jeff Davorn (drums), Thomas Kolowich (guitar), Dennis Kean (bass) Robert B. Gunderson (guitar / lead vocals) Scott Fleming (lead guitar). We called ourselves R.J. Toast. One day we loaded up my ’55 Chevy pickup with gear, hauled it out onto the field and started playing until the Atherton police showed up and shut us down. Nobody got arrested or cited for trespass.”

Tim replied how he came into possession of the photo: “How very, very bitchin is that!! The image was among more than 8000 the Menlo Park Historical Association acquired from a delightful woman up in Vancouver, WA. (I made the road trip to pick them up). She was originally from MP/PA and somehow came into possession of them after Elmo Haydeb closed The Menlo Camera Shop.”

Robert brought it full circle: “What a trip. I had the original film developed there and had them make blowups for each of us. I had no idea they kept a copy.”

I was the best guitarist of the bunch, wrote the songs and became the one to make the group the best