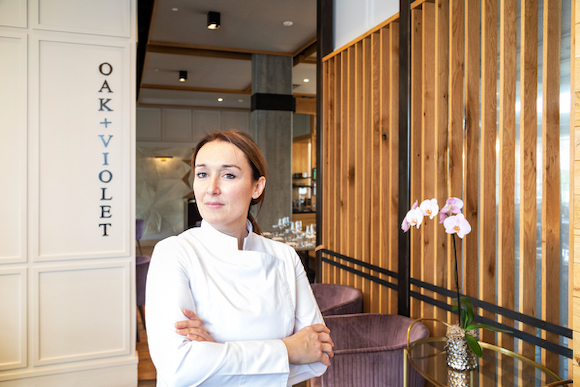 Thanks to her roots in Sicily and work as an architect, think of Simona Oliveri, who is Executive Chef at Oak+Violet at the Park James Hotel in Menlo Park, as designer of food.

During her childhood, the family would spend weekends and holidays in a country house outside of Palermo. “It was like an oasis,” she recalls. “We’d cook all day — and you had to be part of the team. Washing tomatoes. Drying tomatoes. Spreading it out to make tomato paste.”

But food was not her first professional calling. Rather it was architecture. “But I always cooked for friends, often big parties,” she recalls.

She also became familiar with professional kitchens by helping out at a friend’s restaurant. That led to her opening a catering business, often for museums. In doing so she reached out to amazing farmers throughout Sicily. “Organic is how farming is done in Sicily,” she says.

Simona also worked on a yacht for four summers, sailing to the little islands around Sicily. “That helped me get in touch with all kinds of seafood which serves me well today.”

The Park James is celebrating St. Patrick’s Day on March 17 in the Courtyard, 3:00 to 10:00 pm. Along with 14 Year small-batch Redbreast Irish Whiskey, there will be Guinness, Green Beer, Shepherd’s Pies, and classic Fish & Chips.

I have been to this restaurant and it is FANTASTIC. Fresh, imaginative, flavorful. Chef Oliveri is very talented. Highly recommend!