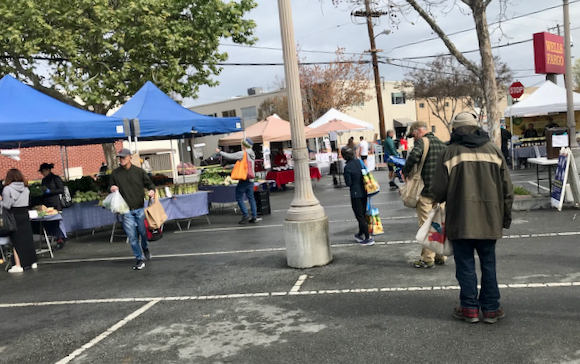 Shoppers who ventured to the Menlo Park Farmers Market today found new rules in place and a slightly different look.

Thanks to the City of Menlo Park allowing the use of some additional car park space, the stalls were spread further apart, providing a wider aisle, making it is easier for people to observe social separation. 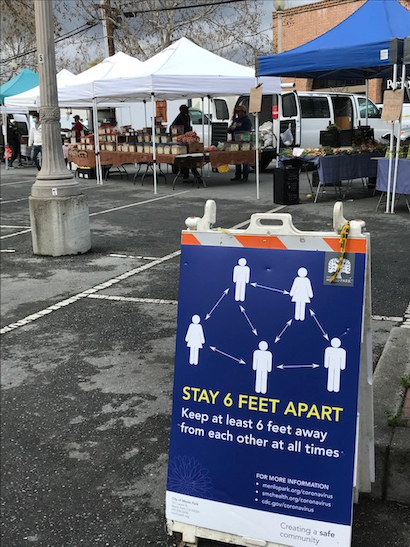 Only 20 people were allowed into the market at at time. The entry point was on Chestnut Street, by the Oak tree, and the exit point at the far end of the market. Those standing in line to enter stood six feet apart.

“The line into the market was quick, about five minutes when we were there,” said Menlo Park resident Mike Laine who shops weekly at the market. “I noticed later that it got longer and shorter, i.e., waits as long as 8-10 minutes and as short as two minutes.

“The lines at the various stalls were similar, sometimes short and sometimes longer. Sometimes none at all!  Everybody was extraordinarily conscious and respectful about distancing and cooperating. It all felt relaxed and even cheerful.”

Another regular market shopper, Sue Swezey agreed: “It’s an important Sunday routine for my family, and it was delightful!”

Market organizers urged shoppers to touch only what they were going to buy. And like last week, some farmers had pre-bagged produce.

Response to the new guidelines appeared positive this morning, a encouraging sign as the police are authorized to shut the market down if the rules are not being followed.

Oh – sorry we missed the farmer’s market. We thought it was closed! We’ll definitely shop next weekend to help support our local farmers.

Sorry/not sorry, but the Farmer’s Market yesterday was a mess. The entrance on Crane St. was blocked off with tape, but not enforced, with many people entering at that side anyhow. To that end, there were far more than 20 people in the market at a time. Some vendors had a “line” several folks deep, but the 6 ft rule wasn’t being followed. Other vendors just allowed multiple people to come up to their stand at once. This chaos, along with the decline in the # of vendors (which is totally understandable at this time) make me inclined to skip the MP Farmer’s Market until the pandemic is over.