Neighborhood walking: What is a photo of Pat Burrell doing on a porta potty? 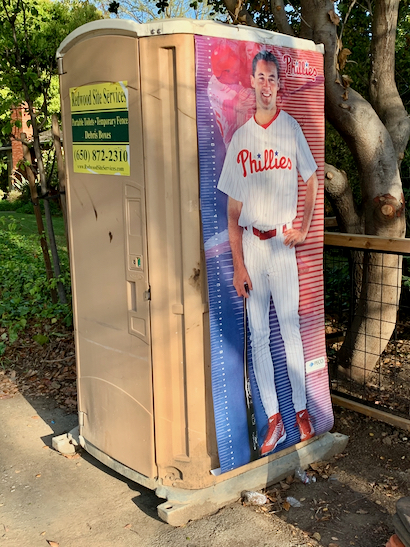 Well, we’re pretty sure that’s Pat Burrell who takes up one side of a porta potty spotted on a neighborhood walk in The Oaks. Being a huge baseball fan, we have great memories of him when he played for the San Francisco Giants.

For those who’ve forgotten: Burrell signed with the Giants during the  2010 season, taking over as San Francisco’s left fielder. He hit 18 home runs in 96 games for the Giants, helping to lead them into the playoffs. He had a key double versus his former team, the Phillies, as the Giants defeated them on their way to the World Series. That fall, Burrell got his second World Series ring when the Giants bested the Texas Rangers.

He retired as Phillie in 2012 (hence the uniform) but stayed local and worked as a special assignment scout for the Giants.

In January, the San Jose Giants announced that Burrell would be this season’s hitting coach, a task that’s been put on hold due to the coronavirus pandemic. That still begs the question why a life size image of him has been plastered to a porta potty near a house that recently completed construction (just under the no more construction gun)!

We’re hoping someone can shed some light on this InMenlo mystery!