Neighborhood walking: All about the Chilean Woodchopper’s House 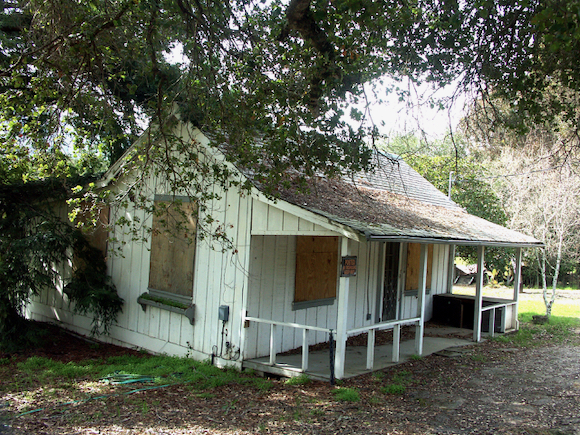 When you take a drive down Portola Road — or walk along its adjacent pathway — you will see a little white house in a sadly decrepit state. It stands at 683 Portola Road, close by the road between the Jelich Ranch buildings and Springdown Equestrian Center. It is known as the Chilean Woodchopper’s House.

What to do with it has been an ongoing question in Portola Valley for many years. Portola Valley is a town that cherishes its heritage and rural ambiance. This building, humble as it is, is one of only two that have survived from the earliest days of permanent habitation of the valley — 150 years. (Zotts is the other.) It also links the town to the greater story of California and even to the broader world.

At the end of the 19th century and into the early years of the twentieth, Portola Valley was home to immigrants from many countries, folks who came to try for a better life in a fertile and beautiful valley. Some worked for the few grand estates in the neighborhood. Most were small farmers. They came from Italy, Ireland, Germany, Portugal, China, the Philippines, Croatia and more.

After the Mexican ranchero family, the earliest foreign residents were the Chileans. They were among the first to arrive in the gold fields when the word spread of the big 1848 discovery. However, they were driven from the gold country in short order by extreme prejudice.

Fernando Purcell, a Chilean who received a PhD from UC Davis in 2004, has published two articles based upon his research. Their titles provide a clue to the mood of those times: “Too Many Foreigners For My Taste: Law, Race and Ethnicity in California, 1848-1852” and “Hanging Bodies, Slashed Ears and Bottled Heads: Lynching, Punishment and Race in the California Gold Rush, 1848-1853.”

Imagine how those Chileans must have felt when they reached San Francisco and discovered that they couldn’t get home. The bay was clogged with abandoned ships whose crews were searching for gold themselves.

Somehow, a few of the Chileans connected with Maximo Martinez, the grantee of Rancho el Corte de Madera, the land that became Portola Valley. Here is their story as a grandson of Martinez told it to Dorothy Regnery and separately to San Mateo County historian, Alan K. Brown in the late 1960s.

Martinez hired the Chileans to cut willows along Sausal Creek to make charcoal for the burgeoning San Francisco market. (Sausal means willow; this same interviewee reported that willows in the valley were then as thick as hairs on a dog’s back.) His account and those of other old-timers report that five or six huts were scattered on the valley floor to house the woodchoppers.

The sad little building at 683 Portola Road is the only one of those humble huts that remains. It was moved to its present site in 1916 by the Jelichs to serve as a ranch hands’ home, and so it served until the Jelichs sold their property. The current owners have no use for it and have offered it to the town, but there is no place to relocate it. It is questionable if it is sturdy enough to be relocated. So there it sits, a reminder of earlier times.

Maybe the current owners should lease it on a long term lease to a trust or the town that can raise money to fix it. Then another organization can become operators and use it as a rest stop for hikers and bikers selling coffees and teas and baked goods. Given the revival of the Alpine Inn and the old Schoolhouse, it would be good to have a use for it where it stands and compensate the owners adequately.

Leave it as is.

My grandparents lived on the Jelich ranch for years. They raised their family there. He was the ranch hand for the property along with my uncle. My aunt, my grandmothers sister, lived in the little house.

Are you part of the Ortega family? This historical account is missing their story…

April, I don’t know much about the Ortegas, only that they lived there and I think one of them drowned. I would love to know the names of your relatives who lived there and some stories about their lives. Any possibilities?