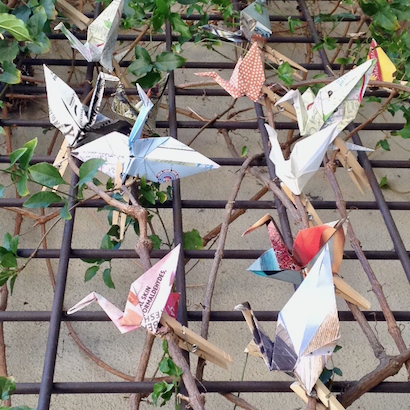 The community is invited to participate in an installation outside Art Ventures Gallery in Menlo Park (888 Santa Cruz Ave.) to commemorate the 75th anniversary of the atomic bombings of Hiroshima and Nagasaki, August 6–9, 2020. The Peace Crane project is part of A/V Gallery director Katharina Powers’ nonprofit, Menlo Park Public Art, and is co-sponsored by the Peninsula/Palo Alto Women’s International League for Peace & Freedom, represented by Menlo Park resident Judy Adams.

The goal of the public art installation on the trellis outside the gallery is to display 1,000 paper cranes from now through August and raise awareness of the 75th anniversary. Residents can view the preliminary installation now, awaiting new cranes made by volunteers.

You can be part of this community project! Judy has prepared packets of small origami cranes, which were gifts to WILPF from the people of Ehime, Japan, for residents and business owners who volunteer to help with the project. The packets, which are clipped to the base of the trellis outside the gallery, include instructions for folding larger paper cranes using ordinary printer paper or magazine pages. Wooden clothespins are provided for participants to attach the larger cranes they make to the trellis.

In addition, the smaller samples from Japan can be used as part of a family’s home display — strung together in a garland with other, larger cranes, and displayed with a sign about their meaning (a sample statement is included in the packet). Judy also encourages business owners and residents to chalk a message for peace on the sidewalk near where they hang the cranes from a tree, fence, or window frame. The project follows a Japanese traditional use of paper cranes at this time of the year.

The cranes have special significance linked to one of the young survivors of the bombing, Sadako Sasaki, who survived the Hiroshima blast as a two-year-old but died at the age of 12 of cancer caused by the radiation. She is reported to have folded a thousand paper cranes — a reference to the mythical thousand-year lifespan of cranes — to honor those who died from the bombings and those who survived, known in Japan as Hibakusha. She, and all the children who lost their lives, are memorialized in the Children’s Peace Monument in Hiroshima, where a youth holds a giant crane aloft.

The Day of the Bomb from Karl Bruckner is a nice book about Sadako. Really sad…