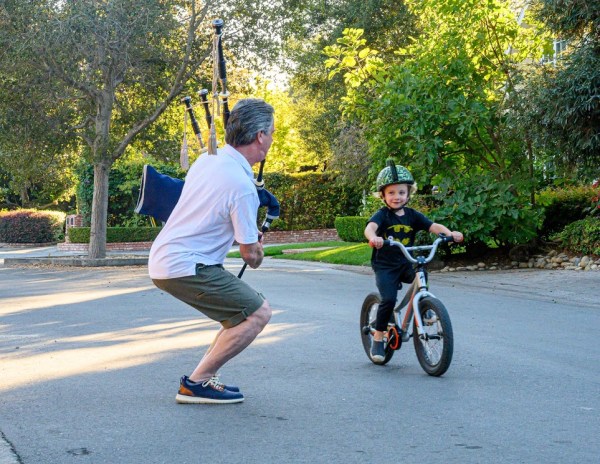 Menlo Park resident Ken Sutherland first picked up a set of bagpipes when he was 11 years old. 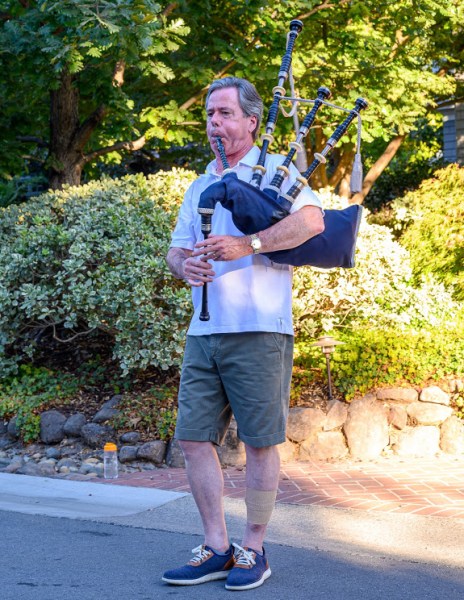 “My father played in a bagpipe band in San Francisco,” explains Ken, who grew up in Marin County. “He and some of his band mates were concerned that people weren’t teaching younger people about piping and drumming.

“He asked me if I wanted to learn. I hadn’t thought about it before, but said sure.”

Today Ken runs the bagpipe band he grew up in, The Prince Charles Pipe Band. The group has not been able to gather since the pandemic began nor travel or enter competitions.

But pipers need to keep playing, and Ken is now giving 30 minutes concerts in his Felton Gables neighborhood every day but Sunday at 5:00 pm. [He’s considering moving the time up a half hour when daylight savings time ends.]

“In March, my neighbor Brad Miller pointed out that the San Francisco Chronicle had profiled a piper in San Francisco who, at the beginning of shelter-in-place, started playing a few tunes on his balcony every evening,” says Ken. “Brad suggested I do the same, so I started up the following week. Our neighbors enjoyed it and came out to listen, so I kept going. 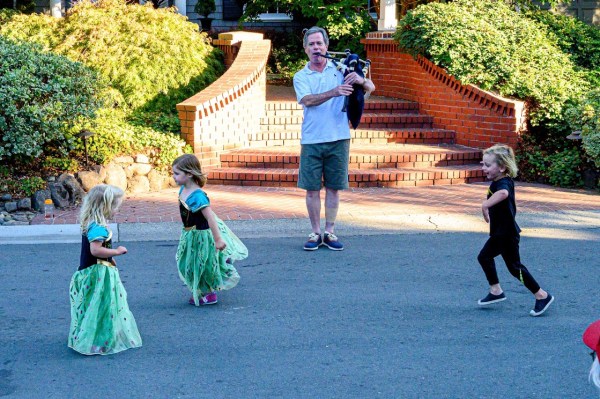 “About four months later the Chronicle reported that the SF piper (who I’ve known for many years, by the way) decided that he had ‘run out of tunes,’ so he stopped his evening performance after 111 days. I was only up to about 90 at the time,  so Brad egged me on to ‘break the record’ and get to 112. And I did just that in August, and we had a celebration with some champagne and a bit of whisky. The Chronicle reporter was contacted but never followed up. Too bad – this was more exciting than the usual news stories!

“Breaking ‘the record’ was all good fun, but after that I kept playing pretty much every day except Sundays and Bad Air Days because it’s now a neighborhood thing, and it keeps me going as well. There are regular fans of all ages (literally, between newborn and 90+!) and the occasional walker or jogger who comes through and isn’t quite sure what to make of it. 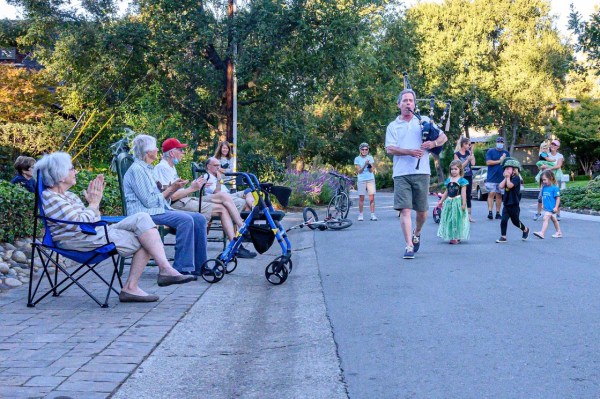 “Plus, if you put your pipes down for awhile and don’t play you feel it in your lungs and whole body when you pick them up again. So these daily performances have been a great way to stay in shape, so to speak.”

This pipe playing can be heard throughout his neighborhood and across the tracks in Park Forest. If you can hear him from further away, let us know!

Great Piper and great Pipe Band still haven’t sent my donation but you know you will get it. Prince Charles Pipe Band