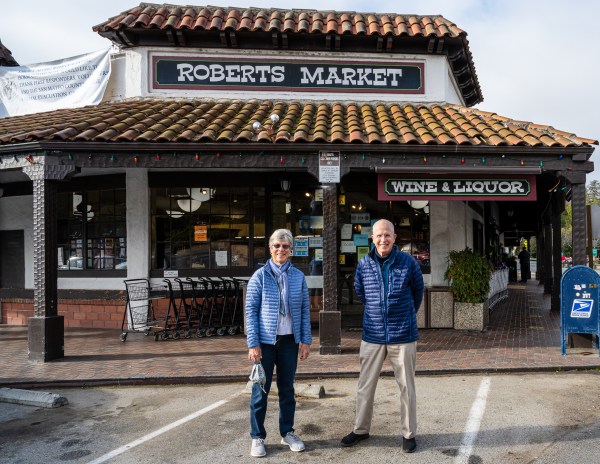 For a decade in the ’50s, Caldwell’s General Store was located at the corner of Woodside and Canada Roads, operated by the dashing Emott Caldwell. Two of his adult children not only have distinct memories about that era but retain a copy of the quirky newsletters their father published called The Crossroads Enterprise.

Jim Caldwell recalls that his father bought what was then called Neuman’s general store on a bit of a lark. “He had some money and viewed it as a kind of hobby.” 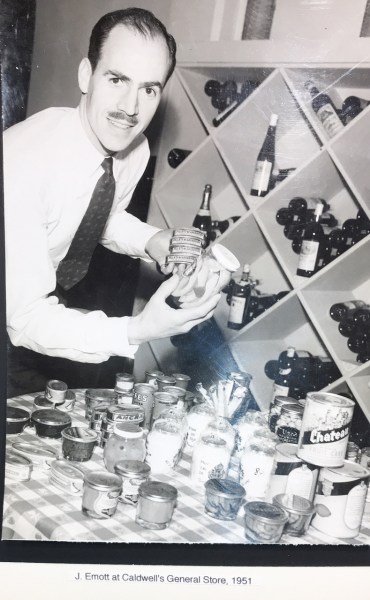 “He’d moved from Philadelphia where the family owned a jewelry business,” explains big sister Haydi Sowerwine. “Evidently, there was a family feud of some sort.”

“We ended up on Polhemus Avenue, so the store, renamed Caldwell’s General Store, was just down the road,” says Jim, an architect and artist who lives not far from the current market, Roberts, in Woodside. “He’d be behind the cash register. Given that he was handsome, he became a confessor of sorts to the women who shopped there.”

Menlo Park resident Haydi describes her father as “eccentric, but a hard worker.”

“He owned the store for about 10 years from 1950 to 1960, when it was purchased by the Robert’s family. He opened and closed it everyday.”

Emott, who died in 2000, leaves a legacy of that decade in The Crossroads Enterprise, which promoted then many services the store offered, for example:

“We’ve had many comments from customers and friends on the number and variety of services we offer here at the store…we’ll repair your lamps, develop your pictures, insure your house or whatnot, teach you to knit, register you as a voter, or dray things around for you…As if this weren’t enough, we’re pleased to announce still another service, Airplane Charter, which we now offer to anyone who will put up with the rather strict limitations we have imposed in the interests of safety.”

Of note: passengers paid $25 per flying hour in Emott’s Beachcraft Bonanza. An experienced pilot who served inWorld War II, he became a flight instructor and later served as a pilot to Fleet Adm. Chester Nimitz. 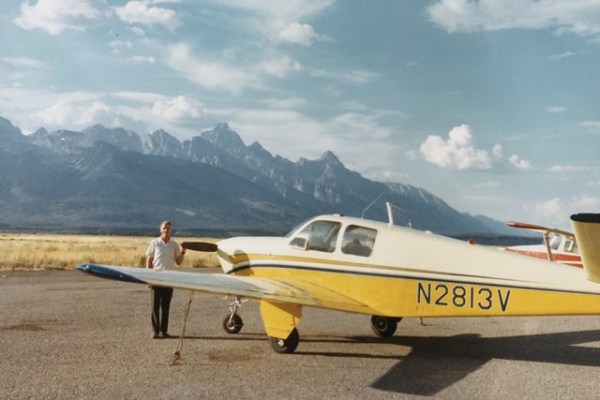 He also advocated for a traffic light at the corner of Woodside and Canada Roads.

“We’ve heard it said that a traffic light right here in the middle of Woodside would make it seem urban, or less rural, or something,” Emott wrote. “We maintain that it would make the intersection a lot safer, which would be a vast improvement over the way it is now, and we invite anyone who has doubt about the need for such a light to spend a brief period observing the situation from our front porch, an experience which we guarantee will convince the most skeptical.”

“In the picture of the store [below] you can see the Standard gas station across the street. The men’s room was right on the corner, and it was smashed into several times by cars going through the stop sign at Canada Road,” says Jim. 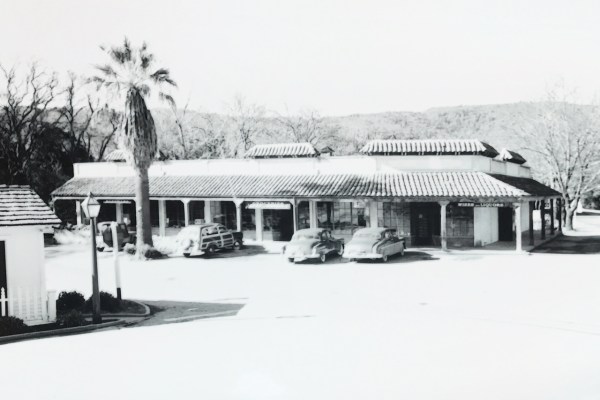 Being the first of six children born to Emott’s three wives, Haydi and Jim can remembers local kids reading comic books in the front corner of  Caldwell’s, something Emott opines about in the January, 1955 issue of Crossroads.

“We had a communication from a friend the other day…whose avowed purpose was to rid newstands of the crime and horror currently flooding them.

“Having as we do, five children and a newsstand full of comic books, this problem interests us more than somewhat and has for a number of years. The infinitude of comics sent to us by the wholesale new agencies does indeed contain a fair percentage of especially gruesome or revolting numbers which we immediately set aside and bundle up for return to the news company…As for the remaining, they are regularly pored over by such swarms of children that sit-down on our front window sill…That they rarely feel impelled to buy the blooming things doesn’t both us at all, for they keep absolutely quiet, and their grubby little hands are kept off the merchandise that people do buy!” 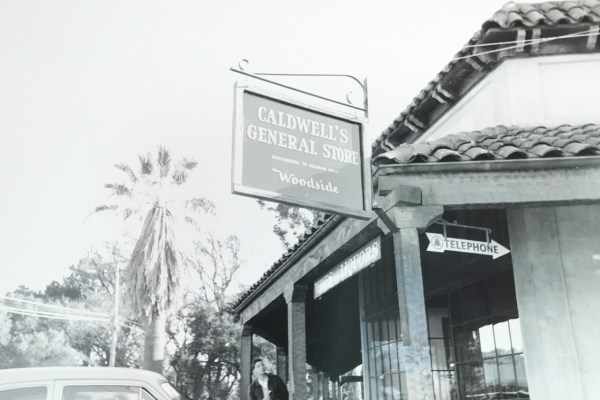 Photo of Haydi Sowerwine and Jim Caldwell in front by Roberts by Robb Most (c) 2021; historical photos courtesy of Caldwell family

I was 13 in 1960 and very proud that my Dad “was” Caldwell’s General Store and saddened when he sold it to Mr. Roberts, just a young “whipper snapper” in my eyes. Through marriage the name would change. I do regret that we missed a precious “business” lesson in that and other transactions. In Europe, probably even then, 13 would be plenty old enough to discuss the ins and outs of business. This 60 year eclipse is full of nostalgic light.

In the years between ages 5 and 10, I begged Mom to take us to “the store” so we could “look around”. It was savoured time in another world: horse country, away from residential Polhemus Ave. Atherton, or the shops in Menlo Park. When we reached the Pioneer Hotel, coming up Woodside Road, it was the untamed world of different friends, twisty manzanita bushes and horse paths, winding roads and redwood trees, of old looking wood buildings, the scent of Eucalyptus trees, of the special European bakery, the fire department, our dentist AND Caldwell’s General Store. It felt like bursting through a dusty veil into another time: warm and refined, in a way that was Woodside’s own. People looked and smelled different in Woodside.

The store became an increasingly elegant outpost: cheese, paté, wine, candies and other treats, came all the way from France. It became an international epicerie. In contrast, I loved seeing the dirty pickup trucks, the horses tied to the posts, men in their jeans, cowboy hats and boots, the hay and feed in the back, the wood floors. I loved joining the other kids in the comic nook: for me it was Dennis the Menace up close and personal. There was hobnobbing with the loyal employees: the butcher, the accountant and the cashiers. The place, surrounded by palm trees, a hub of activity, with its 4 point location, felt like a diamond in the rough.

I was impressed by the Crossroads Enterprise, “newsletter/blog”, quite unusual for its time: a thoughtful well named vintage quarterly publication on the forefront of “customer relations” and marketing for his crossroads enterprise. Perhaps it was also the man newly arrived from the traditional east wanting to be heard in the “wild” west? He had travelled and had values to share. He had strong views about lots of things including merchandising, design and esthetics. I recall him writing and rewriting on his yellow pad or Remington. It was a class act, with carefully selected layout and fonts.

The Crossroads Enterprise wasn’t reproduced like our school work on mimeograph or stencil. Dad flew the final draft from Palo Alto Airport in his Bonanza to a printer in Napa and picked up the finished copies a week later! I/we flew with him to see the venerated printer at least once. Imagine seeing the actual type setting and hearing talk about the fonts, headlines and spacing. Then he would take us for lunch to that iconic Nut Tree highway 80 road stop with the landing strip, for lunch!