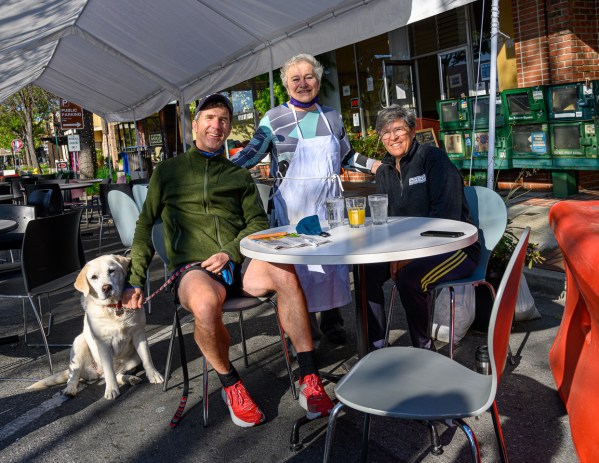 Co-owner Nicki Poulus was spotted saying good-bye to customers this morning at Ann’s Coffee Shop, which is closing today after a 75-year run in Menlo Park. For the past 13 years, Nicki has run the restaurant with her son, George Paplos.

Around closing time Menlo Park Mayor Drew Combs and City Council member Ray Mueller showed up to present Nicki with a proclamation of appreciation. She’s showing them a photo of the original owners in the photo below. 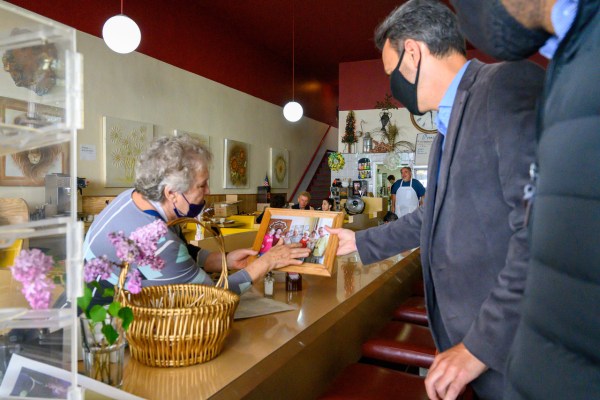 Ann Gilbert opened Ann’s Coffee in 1946. The first location was at 728 Santa Cruz Avenue (near where Ruby’s Livingdesign and Le Boulanger is today.) Around 1962, Menlo Florist owner Leigh Aldrich bought the building on the corner of Crane St., and Ann’s Coffee Shop relocated to 772 Santa Cruz Avenue. Another change in ownership occurred in 1992.

As long time customers can attest, much of the decor as well as the menu remained as it was in the ’50s.

A GoFundMe campaign has been set up for Nicki to help her pay off her mortgage and enjoy a comfortable retirement.

Other Menlo mainstay’s include Cook’s Seafood, which has been in operation since 1928, and Round Table Pizza since 1959.

We will miss you! My wife and I often enjoyed your breakfasts and the staff. Good luck to whatever comes next.

We should have done more to save this and pass on, so sad. Enjoy your retirement you will be missed

4/19/21
Dear Ann,
We haven’t formally met but I heard and read good things about your story. I also loved reading you Ad in the Daily Post. I am sorry you are retiring but wish you all the best. Hope to meet you someday. I will contribute to the gofundme campaign also. God bless you, Aiko

We should have done more to save this restaurant in all the history that it has to offer. Enjoy your retirement you will be missed

I remember so many afternoons sitting in one of your booths having rhubarb pie with my mother. It was her favorite place. She’s been gone 25 years but I remember every detail of our “Ann’s excursions,” Thank you,❤️

Ann’s cafe was the first restaurant I went to after the first confinement ended. We were so happy to see it still open during the pandemic. We will definitely miss your friendly place where a mix of generations could enjoy great food.

So curious to know what will come of the 50s artwork on the walls? I remember the lion so fondly!