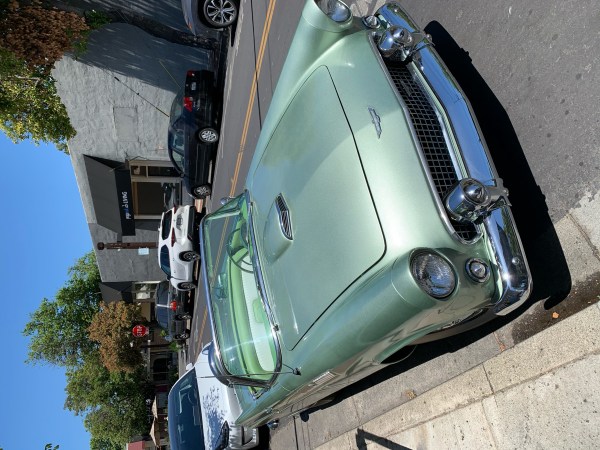 We spotted this mint condition 1956 Thunderbird convertible last week on Crane Street. It was parked in front of Sky Nails and we popped in in the hopes that the owner might be there, but no luck.

Here’s some background about the early Ford Thunderbird models, thank to Wikipedia:

For the 1956 model year, more trunk space was added, the spare wheel was mounted outside (which helped free up trunk space), the exhaust tips were moved to the ends of the bumper, and air vents were added behind the front wheels to improve cabin ventilation…Production total for 1956 was 15,631 units, the lowest of all three 2-seater Thunderbird model years.

The 1957 Thunderbird was the last two-seater Ford sold until the 1982 Ford EXP sport compact car.

When I was a teenager in the 60’s my friend’s brother found a 56 in a barn in Southern Indiana. He brought it home and restored it to new condition. He gave us a ride in it after it was finished. Ever since. I have wanted one of those T birds as well as a 65 or 66 Mustang. Definitely since it only had two seats I would have needed two cars for the times when I had more passengers to carry.

We just bought a 56 Thunderbird and we just love it. It is black with a white rag top. They are so much fun to drive and ride around in SW Florida.

i have a mint condifion 66 tbird and love it here in texas. I wish i had a 55 or 56 but such was not available in sc when i was shopping in 1972. Thank you for info on this car.

I was 5 when my dad bought a 61 conv. for my mothers birthday. how I loved that car. white with a black leather interior. I just purchased one to restore to its original condition just like the one we had new in 61, fabulous rides and great memories

I was 5 when my Father bought a new 61 conv. fory moms birthday. white on white with a black leather interior
I loved that car. Just purchased the identical car to restore to it’s original glory cant wait to drop the top and enjoy the ride loop