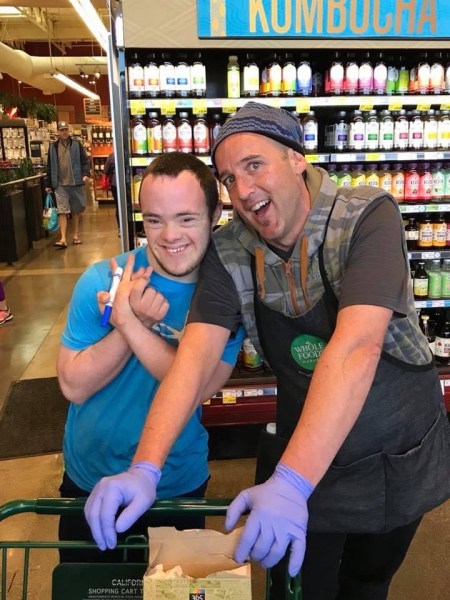 Like many parents, I took my kids to see the movie Frozen in January of 2014. I enjoyed it, but at the time, I had no idea the impact that movie, and its resulting “icy” chain of events, would have on my life and that of my son, Riley.

Riley was born in 2002 with Down Syndrome. At age 12, he was a student at La Entrada School and he loved going to the movies. With his sensory challenges it had taken awhile to build up the endurance to actually be in the movie theater for more than a few minutes, and we had endured many failed attempts. By  age 12, he was a pro, so over the winter break of 2014 his younger sister Emily and I, took Riley to see Frozen.

After seeing Elsa wield her magical powers, he became obsessed with all things “frozen”! He searched “ice storms” on youtube, studied our freezer intently, and with each grocery store trip, would immediately race to the frozen section to watch the ice.

It was on one such trip, in the summer of 2014 at Whole Foods in Redwood City, when I found RIley in the frozen aisle as usual. But this time, he had a friend with him. One of the employees at Whole Foods had been stocking items in the frozen section and had struck up a conversation with Riley.

Now, Riley can be hard to understand, so just the fact that this man was engaging with him was my first sign that this guy was special. We learned his name was TJ and that first day, he let Riley help him stock the freezer for a few minutes! Riley left Whole Foods that day with the biggest smile and feeling so proud of himself! He was on Cloud 9. 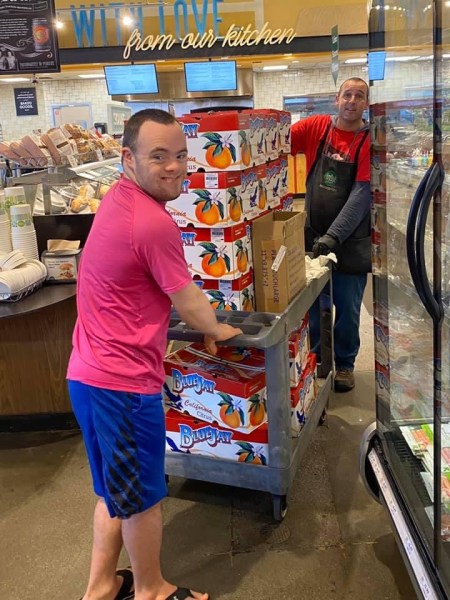 Over the next six years, Riley and TJ built a strong friendship. We would come in each weekend and Riley would look for his friend. Each time we found him, he greeted Riley with a big smile and genuine kindness.

Over the years TJ learned that Riley loves chicken soup, Z-bars and ice cream sandwiches. He learned that babies and dogs make Riley nervous. He would help Riley visit the soup bar and taught him to fill the to-go container with his favorite soup.

Each time we saw TJ, Riley would learn a little more about working at Whole Foods as TJ would always engage him in what he was doing whether it was stocking ice, putting stickers on produce, or arranging mandarins. TJ would often take his break so he could spend his own time showing Riley around the store, introducing him to other team mates, and  expanding his world.

Each time, Riley was so proud of how he “helped TJ do his work”.  It came as no surprise when, during a career planning event of his junior year, Riley announced to his teacher that he wanted to “work at Whole Foods, just like TJ”.

In March 2020, when the pandemic hit, it was especially devastating for Riley.  Predictability, structure, and routines ground him and help him function, so when everything came to a screeching halt, he couldn’t fully understand what was happening. No more bus ride to school, no more seeing his school support team and peers, no more Saturdays at the movies, and no more trips to Whole Foods as we had done most every Sunday for six years.

I would find him on his bed close to tears and he would say over and over again, “back to regular” as if I had the power to bring his world, and all that he knew, back again. It broke my heart to not bring him to see his friend TJ, but for about 3 months, I kept him away wanting to insure his physical safety. 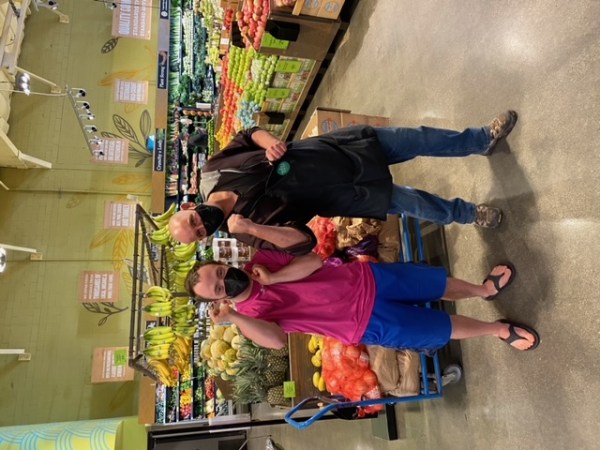 That came at a cost though and in June, I made the decision to bring him back to the store. I had practiced mask wearing with him and taught him air high fives and fist-bumps in preparation. I had told him there would be tape on the ground and no more soup bar. Everything looked different and it was a little eerie bringing him in that first time, but one thing hadn’t changed- Riley and TJ picked their friendship up right where it had left off. Masks and distance couldn’t weaken the bond these two had created.

We are now back to shopping most every Sunday at Whole Foods. Riley always looks for TJ and the fist bumps, air high-fives and smiles fly when they are reunited! Even through Covid  their friendship has remained strong.  TJ is one of the dearest and kindest souls Riley has been blessed to connect with across his 19 years. He epitomizes kindness, compassion, leadership, empathy, and is a true friend and mentor to my son.

Back in 2014 when that little boy with Down Syndrome and a love of all things Frozen, walked into the frozen aisle, he found a forever friend.

I truly hope Whole Foods realizes what a treasure they have in TJ.

Thank you for this heart warming story. I love it!

This is such a moving tribute to TJ, Riley, and to Riley’s wonderful mother. Thank you so much for this lovely piece!

What a great story. It makes me want to only shop at Whole Foods. I aspire to take my time to get to know people like TJ does!

Thank you for sharing this beautiful story! The world needs more TJ’s, Riley’s and Teachers like you to remind us what is important in life!

With so much negativity in the world, it brings tears to my eyes to read this positive story. Thank you so much for giving me a good feeling in my soul.

I love this story so much!! Riley is an amazing young man, and clearly TJ is too. I hope Whole Foods takes note of this story. ❤️❤️

Many thanks, Andi, for sharing this heart-warming story with us all !!

Omgoodness… Love this♡ Beautifully written Andi, I feel compelled to not only shop at Whole Foods, but to say hi and Thank TJ for being such a kind and open soul♡.

Ack! Your story left me teary-eyed! The world needs more people like TJ who truly sees a person for who they are and meets them there. What a blessing he is for Riley! He’s already been a great role model and I hope their friendship continues through the years!

I’m so glad you got to share such a wonderful story! We all need to hear about more things like this in our daily lives. It makes EVERYONE feel better about life and the world we live in ♥️