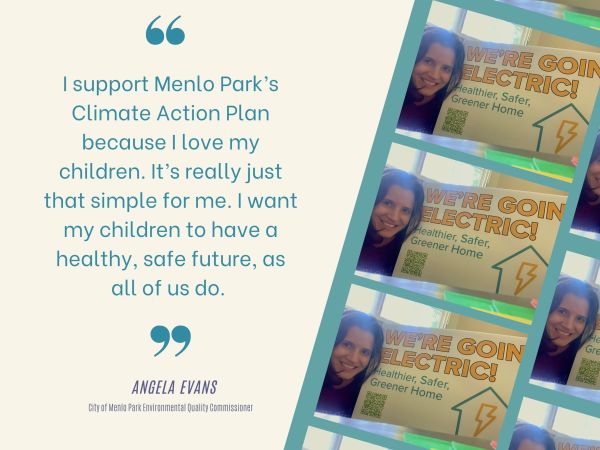 Last month marked the one-year anniversary of Menlo Park’s Climate Action Plan. To celebrate this milestone, Menlo Spark and the 350 SV City Climate Team for Menlo Park highlighted some of the climate actions that people around town are taking, hoping to provide a sense of community pride and inspire further climate action within the city.

These residents are examples of how others can do their part to help the city achieve our goal of zero-carbon.

Angela Sherry Evans was recently appointed to Menlo Park’s Environmental Quality Commission. In that position, Angela wants to “do everything [she] can to help our tech-forward community leverage its resources to set a wildly successful example for the rest of the country.”

Angela thinks that climate action is a “large part of who we are in Menlo Park: we are leaders, we have entrepreneurship in our DNA, we have innovative vision, and we have the technical expertise to accomplish it.”

She has also taken steps to reduce her own footprint by working to electrify her entire home. She says that she and her family “expect [their] utility bills to decrease substantially and to break even quickly, especially with Peninsula Clean Energy rebates.”

Erik Burmeister is the superintendent of the Menlo Park City School District. As an educator, he believes that “taking care of our environment and passing along green habits and a greener world to our children is one of the most impactful things we can do.”

With the superintendent’s leadership, MPCSD is taking on substantial initiatives to contribute to the city’s climate action goals by replacing gas buses with electric ones and establishing a robust composting program. 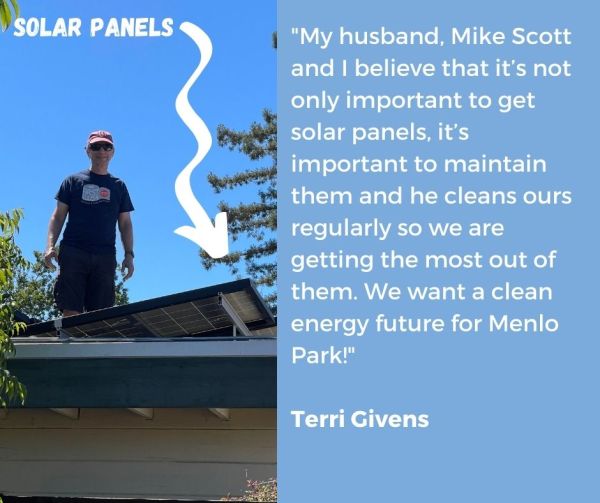 Menlo Park residents Terri Givens and Mike Scott are making significant changes within their home to contribute to the Climate Action Plan, such as maintaining their solar panels to get the most out of their clean energy source.

Since moving to Menlo Park in 2003, Chris DeCardy has been an active community advocate for local climate action. He’s served two terms on the Environmental Quality Commission and is on the Menlo Spark Board. In addition, Chris has committed much of his career to advance climate goals on the national and international level as the executive director of Environmental Media Services in DC and as the acting CEO of ClimateWorks Foundation. Most rewarding, he says, is working “with dedicated neighbors, business and political leaders.”

Mitch Slomiak, a former commissioner on the Menlo Park Environmental Quality Commission and the co-founder of Menlo Spark, has been a longtime climate hero in the city and helped to develop the current Climate Action Plan. Menlo Spark engaged Mitch in conversation about how his thinking about how local climate actions have evolved since he first helped to write the plan.

Menlo Park Environmental Quality Commissioner and past Menlo Spark Climate Hero, Tom Kabat, is in the final step in electrifying his home. Once he is able to install his combined washer and dryer machine, he will be able to finally shut off the gas from his home.

Brooke Hodge is a summer intern at Menlo Spark.

Let’s electrify not only our buildings and transportation in Menlo Park. Let’s also electrify our gardening tools. An electric leaf blower or lawn mower works just as well as a gasoline powered one with less noise and no exhaust!

Portola Valley has shown it can be done.

I support a switch to electric leaf blowers. Gas blowers are a nuisance (loud and polluting) and are not appropriate for residential settings, especially in the current work-at-home environment.

I would also like the City to focus on safe, attractive walking and biking infrastructure in order to motivate those that are able and willing to get out of their car and use active transportation. Automobiles are the biggest greenhouse gas emitter- the elephant in the room.