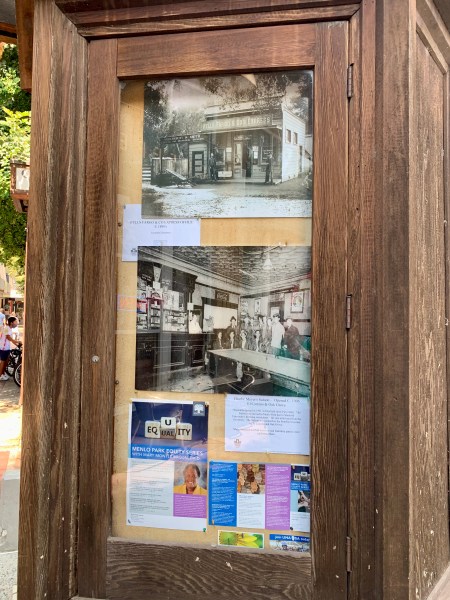 “We are especially grateful to the City of Menlo Park Public Works department for their support and partnership.

“Look for more ‘pop-up’ announcements as we continue our efforts to bring the rich history of our city into the public view.”

The one picture here shows a Wells Fargo bank on top (location unknown) and Charlie Meyer’s Salon, which opened in 1906 on the corner of El Camino and Oak Grove  “Originally opened in Mayfield (now Palo Alto) in 1901,” reads the signage. “The Saloon was moved to Menlo Park due to Stanford University’s drinking restrictions — the one mile limit from the University…Many Stanford football victories and fraternity parties were celebrated there.”

From the looks of the bar I’m guessing Charlie opened a saloon rather than a salon. Unless Mayfield and Stanford had enjoined hair care.