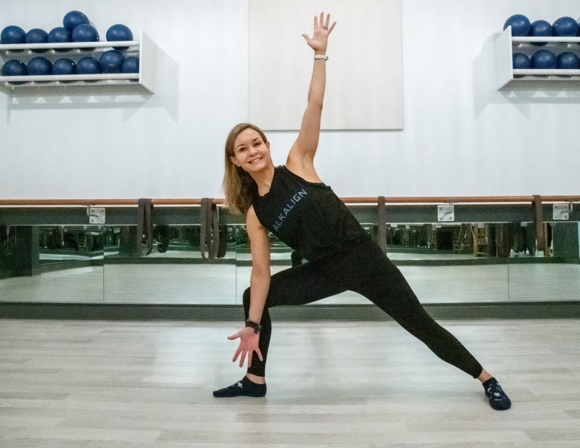 Alkalign Studios is closing after 12 1/2 years on the Alameda. “We are having a big ‘Celebration of Life’ on Saturday, October 23rd from 10:30 am – 12:30 pm and are serving nitro cold brew, sparking wine and kombucha,” emails founder and CEO Erin Paruszewski. “The community is invited.”

The studio at 3528 Alameda opened on March 28, 2009. Erin migrated west immediately after graduating from Georgetown University to start an investment banking job on Sand Hill Road. Several years later — and tired of the San Francisco fog — she decided to relocate to “that warm sunny suburb” and open her own business.

Over the years, she invested heavily in Alkalign and poured hours of time, energy and money into the community that she now called home. Her daughters arrived on the scene in 2010 and 2013, respectively, and they are her greatest inspiration when it comes to promoting messages that help people feel better from the inside out.

Rather than continue to swim upstream in Menlo Park, she is focusing on her Los Altos and Livestream studios, her writing career and spending quality time with her girls.

“I thought we’d rebound from Covid but it seems group fitness is just not recovering and we need to move on,” she emails.

In about a month, a book Erin has written will come to market. “It’s called It Doesn’t Have to Hurt to Work, a memoir about my health and wellness transformation from a type A++ cardio addict to finding balance and freedom from the physical and psychological warfare that is the fitness industry. It is a testament to my growth these past years.”