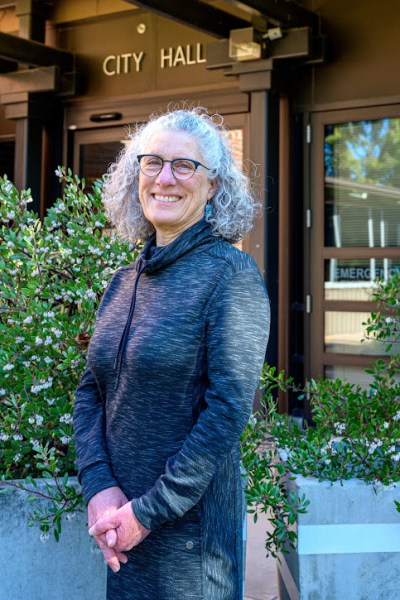 We visited with Menlo Park Mayor Betsy Nash shortly after the Downtown Menlo Park Market Study was released, so our conversation gravitated to that topic, especially pertinent as Betsy herself lives just a few blocks from downtown.

Betsy is bullish on downtown for a number of reasons. “The pandemic has made downtown more community oriented. And the Santa Cruz Avenue sidewalks have made it easier to walk there.

“As we’re coming out of the pandemic, I think we’re going to see an exciting downtown. There’s the Springline development with a mix of residences and restaurants and the Guild Theatre reopening.

“People talk about all the vacancies, but I have a lot of hope for downtown.”

Betsy does concede that there’s a lot of work that needs to be done around growth and development downtown, reminding residents that housing needs to be added per the state.

“Affordability is the biggest issue,” she says. “And I honestly don’t know how we can make it more affordable.

“The City owns the downtown parking lots, so building there eliminates one cost. But if housing is built where the parking lots are now, there must be replacement. parking.”

And then there’s the traffic — and the sometimes dangerous drivers, particularly near crosswalks.

“If we’d monitor ourselves, just slow down and pay attention — that would go a long way,” she says.

In the coming years, Betsy sees real opportunities to shape the City. “Yes,” she says, “everything is changing — and will continue to change.”