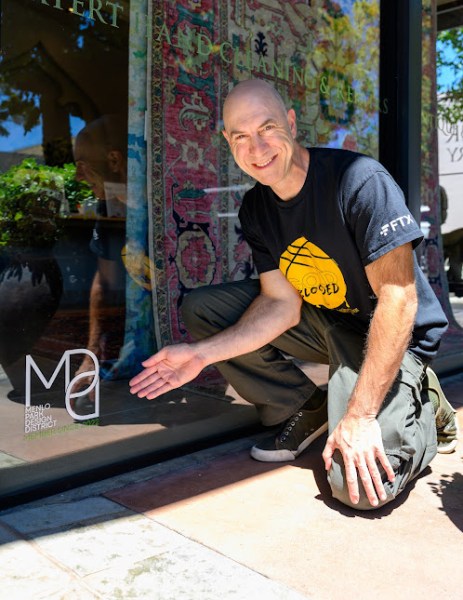 Walk along Santa Cruz Avenue in downtown Menlo Park and it’s impossible not to notice the number of design shops and galleries. What grew organically over the past few decades now has an official designation, the Menlo Park Design District with the unveiling of its website last week.

We caught up with one of the co-organizers, Alex Beltramo, earlier this week to learn more about how it came about and what is planned for the future.

The 20 founding members of the District began working on the idea in 2021 spearheaded by Alex along with co-organizers Elisa Spurlin, owner of the Peabody Gallery, and Keith Quiggins, owner of Rococo & Taupe.

“We walked up and down the street asking the various design-related businesses what they thought about getting together as a branded Design District,” explained Alex. “The response was positive, and we started having regular meetings.

“That led to the formation of the non-profit Menlo Park Design District. It’s easy to talk about, a one-stop destination for designed-related services and purchases.”

Thanks to decals in store windows, it’s easy to find member businesses. In addition, Alex explained that there will be monthly First Thursday events put on by different members.

“People who attend can learn from the business owner’s expertise free of charge.,” said Alex.

Longtime residents are aware that Menlo Park’s design roots go back to 1954, when Arthur Flegel opened his furniture store, Flegel’s, on Santa Cruz Avenue. We had the pleasure of visiting with Art just shy of his 100th birthday in 2017.

The current Flegel’s is now on El Camino next to Kepler’s. Luminaire will open next week in the original Flegel’s location on Santa Cruz Avenue after a two-year renovation.

Half the storefronts are empty, too many rug stores

“Design” stores are places that customers visit only occasionally. How often are you going to buy a sofa, a rug, or new window treatments? On the rare occasion that I need furniture or rugs, I’m happy to drive out of downtown. A vibrant downtown needs stores that people need and patronize frequently. For people who want to stroll, shop, get errands done, and enjoy the area, furniture stores are rather boring.

As Maria says, a vibrant downtown needs stores that people need/patronize frequently. Average daily visitors or average monthly visitors is a statistic that indicates vibrancy. I like the idea of these design businesses coalescing into a group and marketing this way as a way to get exposure. However, Downtown Menlo and other downtowns, like Palo Alto and Los Altos, need more businesses that drive visits. The loss of Village Stationers in MP, PA and Los Altos shows this dynamic in the loss of significant visitors to downtown cores. They themselves drove visits but also were punished by a lack of vibrancy. The El Camino end of Santa Cruz is hugely vibrant as a result of the closure of one side of the street, it is self evident as is the stretch of Ramona in Palo Alto that is is closed off and connects to several pedestrian only alleys where businesses of all types are flourishing. Foot traffic is crucial. Impressions are crucial. This is the approach I would suggest. Just walk through that part of PA and you will see far more vibrancy than any other part of downtown PA. Look at Stanford Shopping Center, there is nothing but foot traffic and notice the flourishing of all business. I am hopeful that the city leaders of these cities can take note and encourage more high daily visit businesses. Nobody wants the town to go dark in the late afternoon as dusk sets in. I don’t want the moniker “Menlo Dark” to reappear.