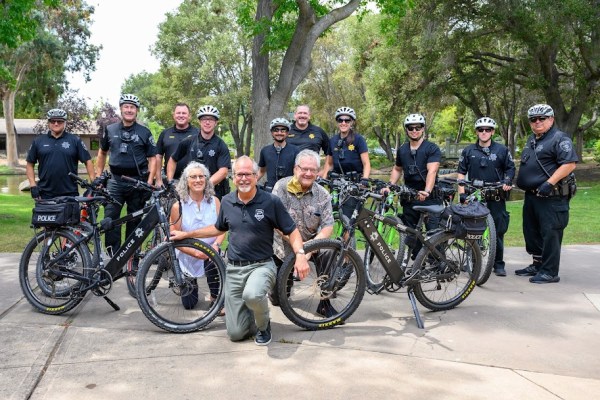 Earlier this year, Jeff Scanlan — owner on Pedego Electric Bikes in downtown Menlo Park — reached out to Chief of Police David Norris to find out if the Department had any interest  in incorporating electric bikes into their current fleet of regular patrol bikes. The answer was yes — they’d been looking into that possibility.

“I arranged for the Department to take one of my bikes outfitted with the necessary flashing pursuit lights for a period of time as a demonstration bike to evaluate it,” said Jeff.  “The original demonstration period was set for two months. Within a week, I was contacted by the Department with a request to purchase two bikes as soon as possible.”

Among the advantages of incorporating electric bikes:

-Bike patrol officers can cover more ground more quickly on the e-bikes than on their traditional bikes, allowing them to pursue suspects they might otherwise not be able to pursue.
-Given they can cover more ground, they can be more visible in the community on the e-bikes than they are on their traditional bikes.
-Officers are also less winded when engaging suspects from their patrol bikes because they don’t have to work as hard pedaling electric bikes.

“Just last week, one of the patrol officers using our e-bike came into the store and shared a story of him catching a bike thief who had just stolen a bike from in front of the Walgreens on Santa Cruz,” said Jeff. “He said he would never have been able to catch him on a regular bike, and by the time the dispatch could have directed a patrol car to pursue the suspect, the suspect would have escaped. The suspect was apprehended and sent to jail thanks to the officer reaching him on our bike.” 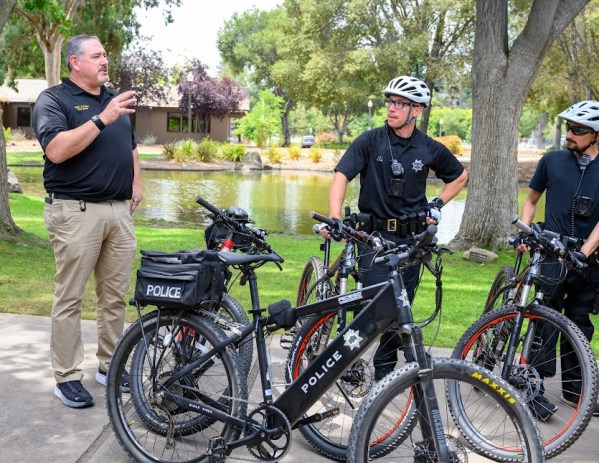 The Menlo Park PD Bike Team is active on a regular basis with positive feedback from both the officers and community members.

“This is an excellent example of a police department being reflective of our community in a creative way,” said Chief Norris (pictured left in above photo). “Menlo Park is such a bike-friendly city, and our bicycle-passion culture within the police department has grown in a very organic way from within.

“We are also tremendously thankful for our strategic partners here in town at Pedego, who made it tremendously easy for us to try, and then acquire electric power-assisted E-Bikes for patrol. These bikes are a hit with our officers and have already been an asset in fighting crime in addition to their effectiveness as a community engagement tool!”

Great story! Good for our police officers, good for a local business, and good for the environment.