Irma Rozynsk passes away at age 97 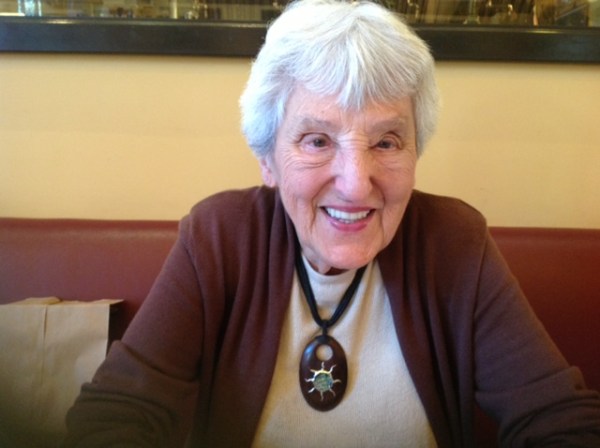 “We thank God for all the blessings He bestowed upon Irma and upon all whom God blessed through her joyful life of Christian service and friendship.”
— Father Patrick Driscoll’s Funeral Mass reflection on the life of Irma Rozynski

For all those who were blessed to know Irma, the word “joyful” will resonate deeply. Irma, who passed away on September 29, 2022,  lived a life that exuded joy. It was a joy rooted in an abiding and serene faith that radiated through every aspect of relationships and daily living.

Born February 28, 1925, in the vicinity of Frankfurt, Germany, Irma’s early childhood experiences were inexorably shaped by the horrors of Nazi Germany. While these experiences may have been scarring, they perhaps strengthened her resolve to serve as a joyful beacon in the troubled post-war world.

She helped forge that new world in America with her beloved husband Stanley (April 4, 1901-March 14, 1997). They were married for nearly 50 years and lived in Atherton. During those decades, they built an innovative office supplies company in San Carlos. Irma was closely involved in helping to run the operations of the business.

After Stanley died, Irma transformed her grief into joyful service and friendship for others. In Stanley’s memory she built a beautiful church in Poland. She brought a cheerful and prayerful presence to the Religious Sisters of the Sacred Heart at the Oakwood Retirement Center. At the Menlo Park VA Hospital Community Living Center, she assisted in the weekly patient Mass along with a group of other volunteers from Nativity Parish. In so doing she brought both comfort and joyful laughter to many patients over many years.

Irma was also loved by her neighbors and fellow volunteers and took an active interest in their lives. One close friend recalled how, “Irma gave me some of the best advice I ever received about marriage.”

Irma was an active and devoted parishioner at Nativity Church in Menlo Park. Despite her advanced age of 97 and infirmities, she continued to attend Mass there whenever possible, including in her final months. She maintained a keen interest in and support of Nativity, Saint Patrick’s Seminary, and the Archdiocese of San Francisco. Irma lived a modest lifestyle and conserved in a sacrificially generous way to support these causes during her lifetime and through her final bequests.

Irma lived a long life, but it was not an easy life. She lived through the dark era of Nazism and experienced the grief that comes to all who lose a beloved spouse. Yet, she channeled those hurts into healing joy for all those who were fortunate enough to be within her radius.

the last name of Irma Rozynski’s niece Renate and her husband Michael is written wrong.

The correct last name / family name is Jaenisch (not Jamisch).

I’m a friend of Renate Jaenisch.