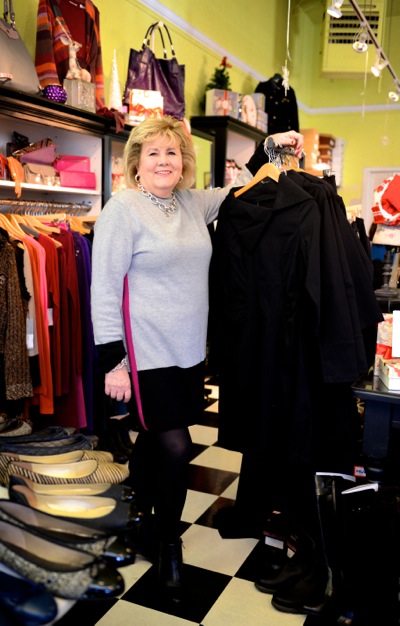 Longtime Menlo Park merchant and resident Lee Murphy passed away on December 11 at 75 years of age. A memorial service open to family, friends, customers, and the community will be held Friday, January 20 at 1:00 pm. at the Church of the Nativity in Menlo Park.

Lee owned and operated a variety of women’s clothing stores in downtown Menlo Park for 30 years first Calla on Santa Cruz Ave. and then Kicks on Evelyn St.

“My retail journey began when I started doing Junior League shows selling ceramic jewelry by a San Francisco artist,” she told InMenlo in a 2012 interview. “After about 10 years, my husband suggested I go out to the garage and find out how much merchandise I had.

“I didn’t know anything about clothing when I started Calla featuring that jewelry line and initially had about four racks of clothes. I was very lucky in that I got good advise from someone who helped me plan the Calla space.”

While still owning Calla (which is now Alys Grace under separate ownership), Lee opened Kicks because “there was no place to buy shoes in Menlo Park.” For the first five years it was just shoes and gifts; in 2011, she added clothing.

Nancy “Lee” (Press) Murphy was born on May 1, 1947,  in Chicago, IL to Norman and Eleanor Press. She attended Catholic grammar and high schools in LaGrange, IL and went on to attend the University of Wisconsin at Oshko.

In 1967, Lee moved to Boston and became a flight attendant for TWA so she could travel the world. In December 1968, Lee went on a blind date and met her future husband, Jack Murphy. Later that year, Jack proposed to Lee at 1 a.m. at the Old Water Tower in Chicago and in October 1969 the two were married in Brookline, MA. Jack and Lee lived in many different locations over their 50 year marriage, including Boston, New York, Vancouver, San Diego, Los Angeles, Orange County, Castle Pines, Woodside, Westport, Carmel, and Menlo Park. Jack pre-deceased Lee in November 2019.

Lee is survived by her two brothers and their wives, Jim and Carol Press and Jeff and Eileen Press; her sister in law, Mary Murphy; oldest son Matt and his wife Laura and their three children, Sara, Nolan and Ben; middle daughter Abby and her daughter Catie, Abby’s fiance Rick and his three daughters Kelsey, Taylor, and Rylee; former son-in-law Trent Collins and his partner Cristina; and youngest son Ryan and his wife Tracy. The family is especially grateful to Dr. Henry Chun at Kaiser in Redwood City who saved her life more than once and to her caregivers, William H. and Taiana F., who cared for her as they would their own mother in her final weeks.

Lee had a lot of passion around supporting local businesses, so in lieu of flowers or donations, please shop and dine locally at the many great places in Menlo Park, especially in the month of January which can be slow for retailers and restaurants.

Lee will be greatly missed! She was always so nice to me and very helpful in choosing right! She was very truthful! Lee had a great eye for merchandise and I loved that she carried Saint James – a favorite of mine!
RIP Lee ❤️

Lee and I shared grandmother’s duties to our granddaughter. She and Jack joined us in my homeland, Norway, for my husband David’s 60th. Every California trip, we stopped in the shop and were ‘talked’ into buying stuff I, at the time, didn’t need! I was so wrong – Lee knew! Thanks for the warmth and friendship you and Jack have shown us! We love you Lee!
Ingrid and David Collins

Lee was a fixture in Menlo Park and always greeted you with a smile and a chat. My kids grew up knowing her both in MP and in Carmel and I just cannot believe she is no longer with us…May she rest in peace and may her family know how well loved she was by her clients, local merchants and just those walking down the street!