The Trundlehouse gets moved — but can you help find it a new home? 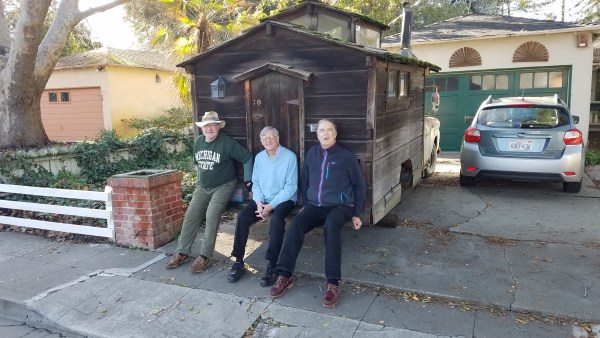 We got an update from Eric Sabelman about his and MaryAnn’s Trundlehouse, a Willows neighborhood landmark last reported to be on its way to a non-profit, with the couple moving out of the area.

Eric emails: “It has moved, but not far, just to Jim’s driveway next door My plan to donate it to a charity in Oakland  fell through when their management changed and the new director apparently considered that it would be a distraction from their real work (probably true).

“Online car donation to radio station KDFC and listing by a classic car brokerage also produced no result. They claim to handle ‘unique’ vehicles, but the Trundlehouse is too unique for them.

“A possible buyer was found in a company called Funky Junk Farms in Southern California, which provides antique cars and trailers for movie props. It would be cool to see the Trundlehouse in a film like Nomadland. But they can’t pick it up for at least a month and aren’t sure if they will take it.

“We got two extensions of the deadline for removing the cabin-on-wheels from our house after it was sold, but still ran out of time. It was pushed by three neighbor guys who still have what it takes — Jim, Bill and Jerry — while I steered and braked. Mark across the street loaned me his new air pump for the tires. I have to say that I will miss these great neighbors, who have come forward when I needed help.

“Passers-by now look at the Trundlehouse in its new Willows neighborhood location as if they can see something has changed, but aren’t sure what it is.

“Now we have another month to donate it or advertise it for sale.

You might want to actually try https://www.onlinecardonation.org instead of just using the key phrase. We have a homeless woman who is gainfully employed that is needing a “home on wheels”.

When I tried to donate the Trundlehouse to KDFC, the process goes through a broker that then transfers title to an auction house. The broker could not find a local tow company willing to transfer it to the auction house, because of its size and needing to cover it with a tarp to keep loose shingles from blowing off.

It is now posted as “for sale” on Craigslist . If there are no takers, I will try your suggestion to donate it to “Online Car Donation”, which looks to be a similar broker.

I would not want to give it “as is” to a person needing a home on wheels – it needs repair and restoration first. My hope is to find someone who likes doing both car restoration and carpentry.
-Eric