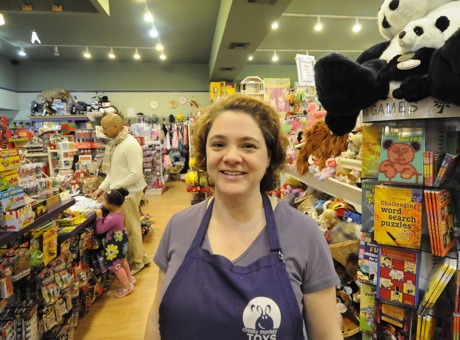 We checked in this Black Friday with downtown merchant Anna Chow, co-owner with husband Dexter of Cheeky Monkey, which made its debut on Santa Cruz Ave. in 1999, expanding to its current space a block from El Camino in 2007. The store was bustling with families on more than “tell me what you want for Christmas” visits – the cash register was ringing, too. Chow said Black Friday usually has little impact on sales but was noticing an  uptick this year, she thinks thanks to the stores participation in Hometown Peninsula promotions. (You can get a 20% off coupon on a Cheeky Monkey purchase – good through 12/24 – on the organization’s website.)

Cheeky Monkey does the extra things that differentiates a local retailer from the chains. It offers free gift wrapping and free assembly; orders from its new website can be easily picked up at the store. And while space limits the number of in-store events, noted puppeteer Nick Barone will be making an appearance this Sunday (11/29/) at 4:00 pm.

The store’s merchandise  also sets it apart. Buying decision are guided by Chow’s philosophy: “A child should be able to bring what he or she wants to a toy – not the other way around. You won’t find any push-the-button toys here.” In a tour around the store, Chow offered some top-of-mind toy picks for this holiday season: