Checking in with Tuck & Patti 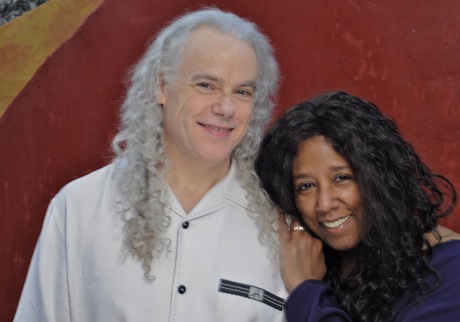 They tour the world performing – and could  live anywhere near a major airport – but jazz duo Tuck & Patti call Menlo Park “home.” “We know everyone,” says Patti Cathcart, who grew up on the Peninsula. “Our street is great. We have a real sense of community. There’s a block party every year. We’ve watched children grow up.”

The two met in 1978 when Patti auditioned for a San Francisco-based band that Tuck Andruss, who’s originally from Oklahoma but came west to go to Stanford, was playing in. They’ve been together as performers and couple ever since. When not touring, they can often be seen around Menlo – and almost always together.

The Tuck & Patti sound is distinct, transcendental to many ears. How do they accomplish this? Replied Patti to an interviewer: “It goes back to the fundamental principle we agreed on when we first got together in 1978: We don’t sing or play a single note that doesn’t come from our hearts. Although I studied acting and became very good at acting out a musical role convincingly, we decided there would be none of this in what Tuck and I do. If it speaks to my heart, then I can make it speak to your heart.”

It’s been over 20 years since they released their breakthrough album, Tears of Joy, but the vocalist and guitarist continue to find an audience wherever they go. They also continue to record;  a live CD, recorded in a temple in Kyoto, Japan,  is set for release in the spring. Local fans who want to hear their music live, not just see them about town, can catch them on Valentine’s Day at a benefit concert for SEVA Foundation at Bimbo’s 365 Club in San Francisco (along with another Peninsula resident, Joan Baez) and in Santa Cruz at Kuumbwa Jazz the following evening.

A potentially even bigger treat for Menlo residents is that the husband/wife team have decided to start teaching again. “We love to teach,” says Patti, “but it was hard to do with all the traveling. This year we’re resolved to do more.”  Anyone interested in taking voice or guitar lessons from two masters, should contact the duo through their website.

I remember Tuck and Patti playing in the downtown Palo Alto area in the early 80s. Where? Certainly at the Varsity Theater, but maybe also Cafe Verona. I didn’t know what had happened to them, and although I’ve lived in MP since 1975 I’ve never realized they live in MP also. Now I can look forward to hearing more of their music.

I recall exactly where I saw them for the first time. They were playing in some sort of open air concert in front of the PA City Hall. Jaw dropping, mesmerizing, beautiful, loving. Haven’t ever noticed them around town, but that would be be cool!

Here is a wondrous live clip of one of their recent performances:
Tuck & Patty “time after time” – porto sant’elpidio –
http://www.youtube.com/watch?v=3D9TDsApQ7o