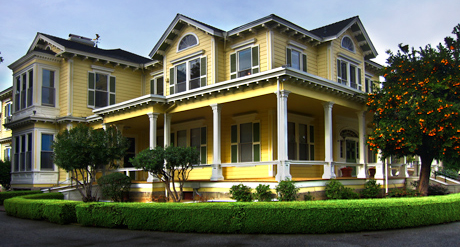 Over on Noel Drive, just a short distance from The Gatehouse at Ravenswood and Laurel, stands the Bright Eagle – reported to be the second oldest surviving structure in Menlo Park. It was built by San Francisco businessman Lemmon T. Meyer as a summer house in 1869 – 140 years ago!

Since then, the building has served many different roles including a gambling and poker parlor in the 1870’s, a family home, an officers’ club for Camp Fremont during WW I and a military academy. In the late 1930’s, it became a hotel – known originally as the Laurel Grove Hotel and later as the Marie Antoinette Inn. In the early 1960’s, it was purchased by Mary J. Rafferty who converted it to an antique parlor and tea room. She gave the building its name: Bright Eagle. In the 1970’s it was converted to offices and continues in that role to today.

What year was the home converted from a military academy to a hotel?

Good history on The Bright Eagle. A small but meaningful correction: the name of the businessman that built it is incorrect. The correct name is Theodor Lemmen Meyer. Born in Hamburg in 1832. Emigrated to America in 1853. You can check his genealogy and his descendants in lemmenmeyer.com.

I happen to be one of them.

In the 80’s you could rent the space for parties. I had my wedding reception there in 1986 and it was the perfect setting for a most memorable wedding!

Hi,
I ran into your post of a wedding at Bright Eagle Mansion in 1986. I was the manager and caterer during the years of 1984 thru 1988. I guess we met each other during that time. Thanks for the nice comment. Hope you’re living happily ever after.
B. Green

Hey, B. Green and others. We probably met too. We had our rehearsal dinner there on Sept. 26th, 1986. Great memories.

My wife Judy Terhune of Menlo park and I had our wedding reception there May 24, 1969. Our photographer Gordon Ingersoll of Menlo Park took our pictures. The grand staircase was a great spot for throwing the bouquet and we drove off in a 1937 Packard owned by Ingersoll. I know he photographed many of the local families over the years.

We had a family reception/ party there in 1966.

…After the deadly 1989 Earthquake I personally was tasked by the former Nevada Owner Of the Bright Eagle to rehabilitate this historical Mansion together with the guidance and protection of my late body guard and astute friend Mr Jim Llewellyn. I spent most of my waking hours 24 hours 7 days a week overseeing the complete renovation, repainting with the Bright yellow color, remodeling among other things that took me at least 6-8 months and finally the 1990 reopening of this Mansion to the public presenting its most pristine and unique place to hold special events and functions for private or business corporate uses and many more…

I had lived in the attic (4th Floor) which was uniquely converted two bedroom residential home! I had met the haunting “ghosts” of the Bright Eagle . I spoke with them!! I was the Administrative Director of the Bright Eagle when Hollywood Movie Director Brian de Palma offered to use the Mansion as one of the setting for his “mystery-murder-horror movie” in the early ‘90’s but did not happen because they have to turn down some of the interior decor “to fit in the theme of their movie to be shot” which will destroy the historical ambiance of this Mansion.
…My life has been so meaningfully memorable to be a part of what is, what was and what will be “the Bright Eagle” in the years to come – 2020!!