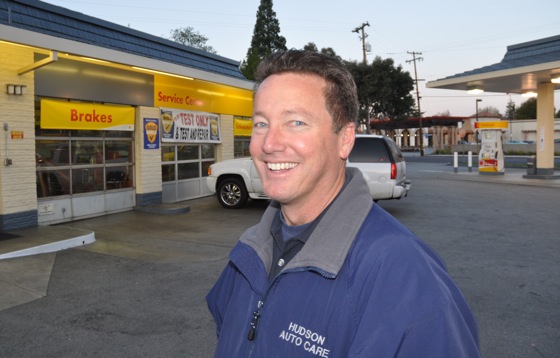 Richard Hudson remembers his introduction as a boy to the family auto care business: “I was small enough – and car hoods were strong enough – that the other attendants would boost me up on the hood to clean the windshields.”

Menlo Park was still a bit of a country town when Richard’s dad, Raymond Hudson, decided to start his business at the fabled crossroad of Middle and El Camino in Menlo Park in 1955. “El Camino was a two-lane road,” says Richard. “There were orange groves all around and a big cement plant on Ravenswood.”

Richard, 48, chose to follow in his Dad’s footsteps when he graduated from St. Francis High School, working his way up from windshield cleaner to proprietor. “Dad understood that this is a business based on trust, and I’m proud to say that we are still serving families that were my Dad’s customers – in some cases we are seeing the fourth generation.”

Richard has seen big changes in the nature of auto care since he started working at his dad’s two-pump, two-bay Shell franchise. “With credit cards at the pump, we don’t really have a relationship with gas customers the way we once did.” Accordingly, when Shell approached Hudson to purchase the family’s gas and snack shop operations, he accepted the offer, freeing him to focus on maintaining his customers’ cars in a gleaming, modern, 4-bay facility featuring the latest in computerized auto diagnostics.

“There’s a lot more overhead in our car-care business, but that’s something we understand – we’ve worked hard for 55 years to earn our customers’ trust” says Richard, and, judging by the small sea of cars that arrive each morning for service, the second generation of Hudson Auto Care is continuing the tradition.