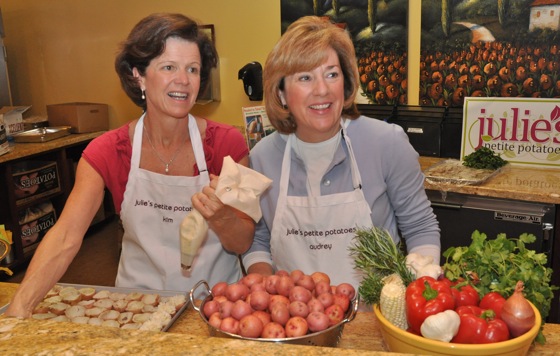 Some 20 years go Kim Menninger (pictured left) began making twice baked potatoes with her mother Julie. It became their specialty dish, much in demand for pot lucks and such, as in “oh, just bring those killer potatoes!”

Earlier this year Kim returned to the meticulous tedium that produces such outstanding results, and, along with business partner Audrey Foraker (the two have known each other since high school), launched Julie’s Petite Potatoes, named in memory of Kim’s mom. Now they find themselves producing over 1,000 mini treats a week.

InMenlo caught up with them at  Deeelish! – site of their production kitchen, thanks to owner Kyle Vogel – as they were whipping up a batch for May’s flavor of the month, a tribute to Cinco de Mayo called Chili Cheese Puffs. Their three “signature” potatoes – Garlic & Chive, Roasted Red Pepper & Corn, Caramelized Shallot & Gorgonzola – are always available, even as monthly flavors change.

Made in two sizes from fresh ingredients, all the potatoes are sold frozen and go directly from freezer to oven for an easy meal accompaniment. Julie’s Petite Potatoes are currently stocked at Bianchini Markets in Ladera (just down the hill from where Kim lives in Menlo) and San Carlos, as well as at Deeelish!.

Audrey credits Kyle Vogel with being a huge help when they were starting out. “We can’t thank him enough,” she says.

Less than six months into the business, Kim and Audrey are constantly tweaking both brand and potatoes. They’ve just adopted a new logo, plan a new website, and welcome feedback on the potatoes themselves. “We do a lot of tastings and are always eager to hear what people think,” says Audrey.

Way to go Kim! I have had your potatoes and they are fabulous! I’m so glad I can find them at Bianchini’s now!

Kim and Audrey’s potatoes are to die for! They are the first item we all look for when going to a party. They are so easy to pop in the oven and wow your friends. Congrats to Kim and Audrey!