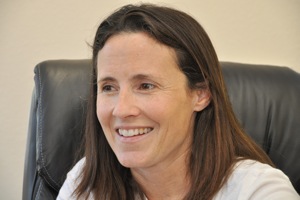 There have been a number of siren songs in Dr. Janesta Noland’s life. While she grew up thinking she’d become a physician – her father was a doctor, her mother a nurse and grandfather a small town doc – she gravitated toward the classics during her undergraduate years at Stanford.

“I was all set to pursue a graduate degree in that area when it hit me that I’d end up making a pittance just to publish papers explaining the meaning of one word within some Greek tragedy,” she laughs.

So it was back to medicine where she found herself drawn to critical care. But her path was again altered, this time toward primary care and eventually pediatrics.

“The adrenaline rush and intellectual stimulation of critical care/ICU is undeniable,” she says. “But in patient consultations, I found myself paying as much attention to the children in the room as the adult I was treating. Plus my husband’s career is pretty intense and I realized we couldn’t both have high intensity jobs and also a raise a family.”

Janesta joined the pediatric staff at  Menlo Medical Clinic following her residency. Two years ago she was one of three pediatricians to found the first exclusively pediatric concierge service on the Peninsula – Burgess Pediatrics in Menlo Park. The practice, with its more limited patient load, provides well and illness care from birth through college graduation.

“When we started doing this, I didn’t know how much I would like it and how satisfying it would be,” she says. “The deeper relationships we form are so meaningful.”

When talking with a pediatrician, it’s natural for the conversation to shift to parenting now versus parenting 30 years ago. Janesta is quick to acknowledge how much it’s changed.

“I let my own kids (she has three, age 10 and under) play by themselves [in age-appropriate settings] and run barefoot in the summertime,” she says, “and this really surprises people today.

“From what I’ve observed, with children under five, the vast majority of parents feel they’re remiss if they are not guiding the child every waking moment. There’s been a shift away from letting kids play independently and creatively. But kids need to look at and react to the world around them in their own way and time. When we do everything for them and book them 24/7, that doesn’t happen.

“So one of the things I do as a pediatrician is to counsel parents to chill out and embrace the joys of childhood. Yes, kids are going to fall down, stumble, get bruised. But letting them experience the world around them on their own also allows them to be self-sufficient and develop the coping skills that makes them successful adults.”

So refreshing! Common sense parenting, relational doctoring and letting children be children. Hats off to you Dr. Noland!