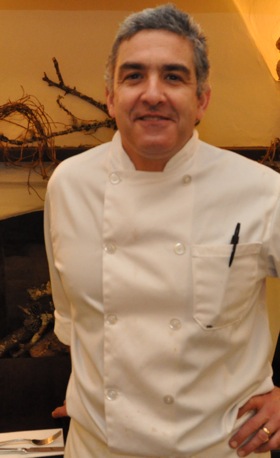 The upcoming three-day weekend is not only the unofficial end of summer, it also marks the first anniversary of Cafe Primavera, which opened last year on September 4 at the Allied Arts Guild. The Cafe kitchen is overseen by Menlo Park resident Greg Russi, who serves as Executive Chef. We asked Greg to suggest a good recipe to cap off the summer. Here is his reply:

“During this past barbecue season, most of you ‘backyard culinarians’ got stuck attending to your grill and had little or no time to socialize with your wonderful guests. This recipe is simple, delicious, can be done  hours before your guests arrive – and still has that ‘end of summer’ barbecue flavor!”

Combine all ingredients, except scallions, in a saucepan, and bring to simmer. Allow to simmer 20 minutes, and remove from heat. Allow to cool, fold in scallions.

In a stainless steel or Pyrex bowl, combine all ingredients and mix well, cover with plastic wrap, and allow to marinate at room temp for one hour before grilling. Grill over direct heat, but low temp until exterior of meat is nicely caramelized. Remove to baking pan, and baste generously: pour extra sauce in pan, and add one cup of chicken stock (broth). Cover pan tightly with foil and bake in a preheated oven 300 F.  for 60 minutes (uncover last 10 minutes). Baste with residual sauce in pan before serving.