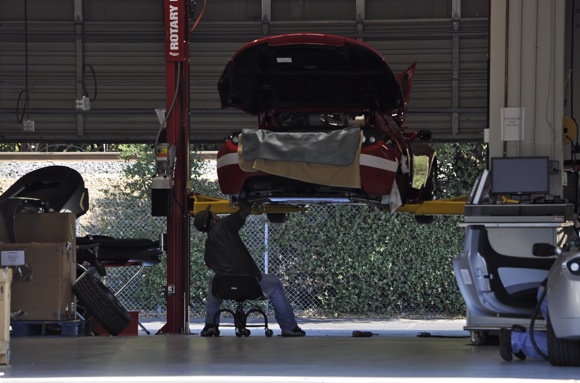 Passers-by may well have seen the sleek, gray and very modern Tesla dealership at 300 El Camino in Menlo Park, just opposite the intersection with Partridge Avenue, on a lot that once was home to Anderson Chevrolet. One of the first two U.S. showrooms (the other is in Santa Monica), this dealership has the distinction of also being the facility where Tesla assembles its $109,000 Roadster model. Four garage bays behind the showroom are home to the final assembly of the car’s major components

A truly global product, Tesla’s carbon fiber body panels are made in France by Sotira, then assembled into a unique chassis in Hethel, U.K., by contractor Lotus. The cars are then sent to Menlo Park, where workers install the U.S.-built Tesla AC induction motor. The 1000-pound battery pack is assembled at Tesla’s  Palo Alto headquarters using cells from Japan’s Panasonic. The single-speed gearbox is built by Michigan-based supplier Borg Warner Inc. 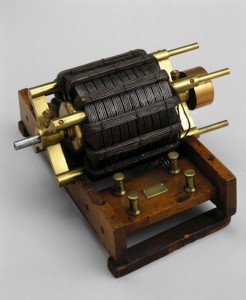 The Tesla’s 245-horsepower electric motor has only one moving part and weighs less than 80 pounds: the design is a direct descendant of the AC induction motor that Nikolai Tesla patented in 1888 (pictured). The lightweight motor and Tesla’s custom controller electronics are also installed in Menlo Park, where many of the 1,300 Teslas now on the road have been produced.

Tesla founder Elon Musk has plans to begin producing a new car, the Model S, in the near future. The $50,000, seven-passenger sedan is meant to compete with Lexus and other luxury brands, and Musk hopes to produce about 20,000 cars per year initially. Tesla’s Menlo neighbors need not be concerned about a surge in workers or parts deliveries,  however. Tesla recently made a good deal for space in the now-dormant NUMMI plant in Fremont.

The dealership is more across from Cambridge ave. than Partridge. The sign definately is anyway

Thank you for pointing that out. I was looking at Google maps when I wrote that.we drove by the other day and you’re quite right, Cambridge it is…