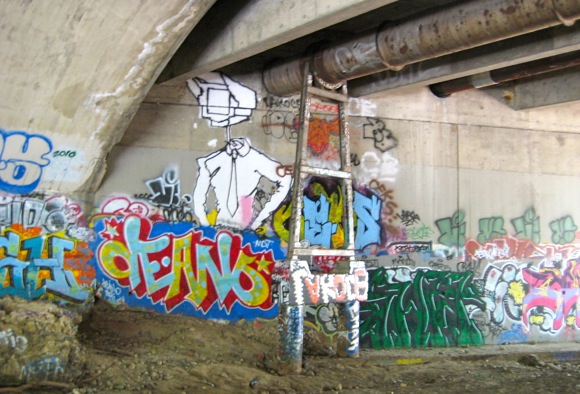 As every California-educated person learns in elementary school, a makeshift road existed south to north in the state, connecting the Spanish Missions. What was to become El Camino Real running through the San Mateo County was named on early county maps, “Old County Road.” Today some of the original sections that are no longer part of El Camino bear the older name.

A wooden bridge across San Francisquito Creek was constructed about 1852, later replaced with a steel reinforced concrete bridge in 1913 (two lanes?). El Camino Real in Menlo Park was widened to four lanes and paved around 1940. 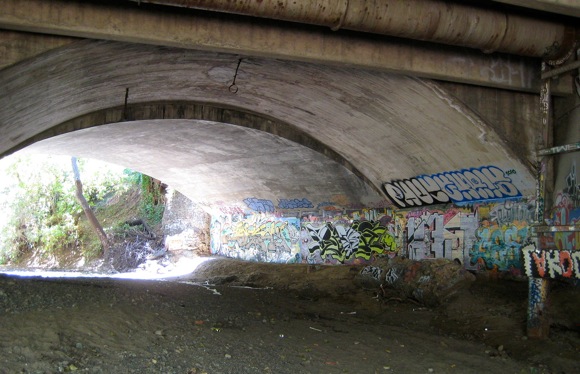 Today’s bridge – the equivalent of eight lanes – was last upgraded in 1955. The approach to the bridge from the creek floor on the south side is somewhat bucolic. The banks here are 15-20 feet high, somewhat steep and difficult to descend. When under the bridge looking back toward the south, the massiveness of the bridge is perceived.

In recent years, the bridge has provided a shelter for a multitude of homeless and transients, the evidence of which is seen in the amount of trash present. Of course during the rainy season, water fills the creek floor making the bridge itself mostly unusable as a shelter. (Note: photos that accompany this post were taken before this year’s rains.)

The underside has also been a favorite spot for graffiti artists. It is interesting that each artist seems to respect the work of those who preceded him. This might change now that most of the accessible wall has already been decorated.

This is the third in a series of posts with accompanying photos by InMenlo contributor Jym Clendenin about what’s “under Menlo.” Read the first and the second.

The 1913 and 1955 dates are from the National Bridge Inventory (NBI). Imbeded in the bridge cement on the west side facing the creek is the date 1930, which is a few years before El Camino in MP was widened toward the west. Printed on the Palo Alto end of the east side of the bridge is the date 1955, which is apparently when the bridge was widened toward the east to accommodate a continuous turn lane from Alma. There were no bridge upgrades in connection with the recent extension of Willow Rd aka Sand Hill Rd to El Camino.