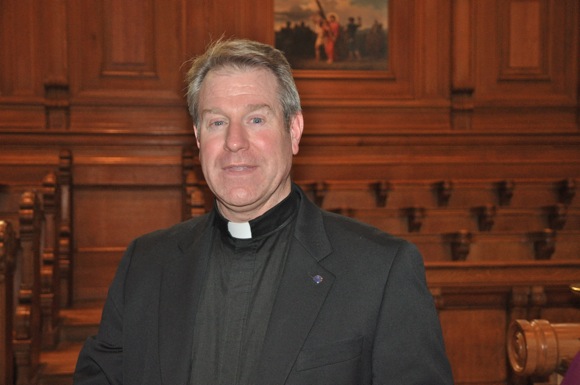 Those of us new to what goes on behind the walls of St. Patrick’s Seminary & University might find it curious that the institution’s President/Rector was the man leading the chorus at a recent Christmas tree lighting ceremony. While not typically the task of the men and women who head post-secondary schools, it is very much in keeping with the spirit of Fr. James L. McKearney, S.S., who’s lead the school since last July.

Music has always been his muse, even now when it jockeys for time with administration and other priestly duties like preaching and pastoral care.

“I’m not a ‘lifer’ in the seminary world,” he said during an interview in his spacious office in the magnificent old (1898; rebuilt 1908) building that houses the preeminent Roman Catholic seminary on the West Coast, located on Middlefield Ave. in Menlo Park. “While entering the priesthood was always at the back of my mind, I wanted to be a musician. That’s what I studied and that’s what became my profession.

“Ironically, it was when I finally got my dream job – teaching a high school choral group – that I also started feeling a hole in my heart, which lead me to attend seminary. But as I tell our seminarians, you don’t go to seminary to become a priest, you go to study, discern and see if you have the aptitude to become a priest.”

Happiest being in school – and playing music

Fr. McKearney was ordained in 1997 and is a member of the Society of St. Sulpice, diocesan priests whose responsibility it is to provide seminary education and continuing education for fellow priests. (St. Patrick’s Seminary was founded in 1898 by five Sulpicians.) After ordination, he continued his education in Rome, eventually earning a doctorate in sacred music, among other degrees. “I have a great love for our church. My time in Rome underscored that – being in Rome is like Catholic Disneyland.

“The gist of my journey is that it’s been fun,” he continued. “For me, I’ve always been happy when I’m in school and playing music. And here I am.”

Today, he finds himself  leading an institution that is close to bursting at its seams. When the winter candidates arrive, it will be full. The seminarians at St. Patrick’s are not second career men as some might think; the average age is 30. 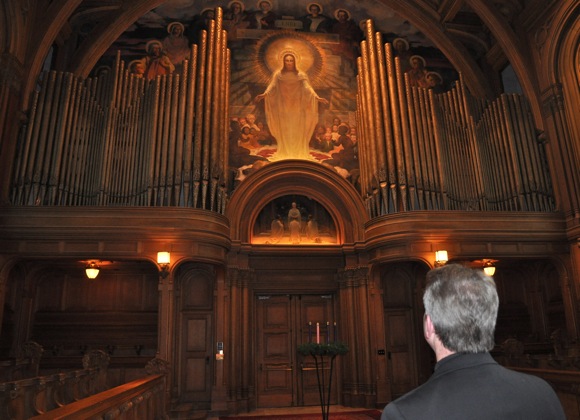 Fr. McKearney’s passion for his vocation and avocation is palpable. While he’s there to carry on the tradition of preparing men to become Roman Catholic priests, he’s open to new ideas and ways of doing things and that includes being more a part of the community. “This campus is a Menlo Park jewel and we really want to reach out to the surrounding community. That was the reason for the Christmas tree lighting ceremony. We don’t want to be dark and mysterious.”

Fr. McKearney said that the historic buildings need renovations and he’d like to expand the number of seminarians that can study at one time. He dreams of building a preaching institute because “good preaching is what people want and don’t get enough of.” He faces of the challenges of raising money – he’d like some day to have endowed theological chairs – and recovering from the damage created by the sex abuse cases.

“We live in a different world today than the mid-20 century when there was a plethora of priests. There’s a greater need to form pastors in the seminary today. We have a history of collaboration, and we need to hang together to teach what we believe. We want to joyfully give people the reason for our faith.”

Fr Jim McKearney,
I have listened to your song “Oil of Gladness, Oil of Joy” and like it very much.
I would like to teach it to my choir here in Kauai, Hawaii to sing at the Chrism Mass on April 2nd. May I please have a copy of the music? How much is it to purchase the score?
Hope to hear from you soon.
Thank you very much