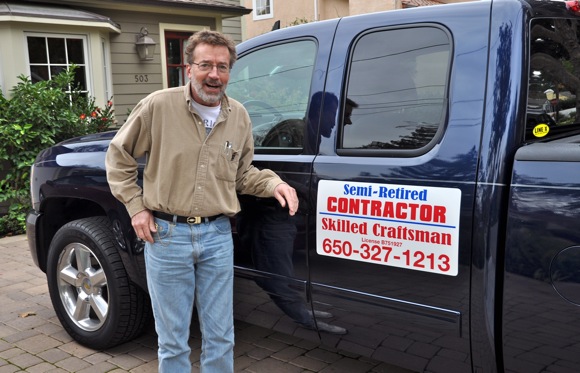 Kevin Bartling may be relatively new to Menlo Park but he’s known around town – even if people haven’t met him personally. That’s largely due to the spiffy truck he drives with signs on each door proclaiming “Semi-Retired Contractor. Skilled Craftsmen.”

Kevin moved to Menlo three years go after living in Truckee and Southern California. He’s been a contractor most of his working life and still does large building projects. But what he thrives on is fixing things.

“I’ve always been naturally handy,” he says. “and my forte is figuring out why something isn’t working and fixing it. I prefer that to big projects. Sometimes I have to think on a problem for awhile. But usually a little common sense and patience pays off.”

He does admit that the big remodels are his bread and butter; these jobs provide steady income. He brings in other local people when needed on the larger projects. And every once in a while he’ll get called on for something a bit unusual.

“A guy up at Donner Lake hired me to build a dog house,” he says. “It had to have a window overlooking the Lake and look like the main house, which was made of logs. He asked me to use stainless steel for the roof because he wanted to fillet fish on it. Plus, the dog had to have access to both outside and into the main house. It was one expensive dog house – almost $4,000!”

Kevin Bartling is a contractor who is very effective at his job. He makes a construction job seem easy. Kevin has the ability to source the right subs and give you guidiance on what to do. His expertise has been very valuable. I would recommend him without any reservations. He says he is semi retired……that is not correct…..he worked very hard on our addition.
Thank you