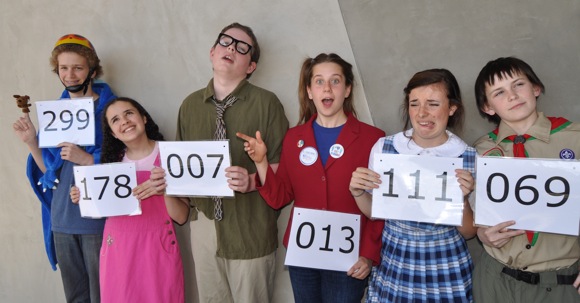 A whole crew of “freshman” — and a couple of sophomores – are in the spotlight in Menlo-Atherton High School’s production of The 25th Annual Putman County Spelling Bee. Four of the six actors playing the roles of spelling bee contestants are freshman, and new drama teacher, Debra-Jean Zwicker-Sobrepena, and new music teacher Kent Kurrus, are partnering in their first production together. (Both pictured below left.) 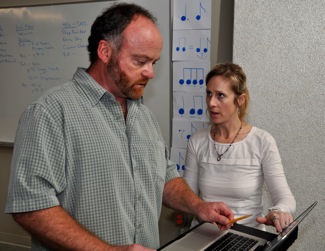 “This is really the combined efforts of the entire performing arts department,” said Ms. Z as the kids call their teacher. “The kids are so talented – they all have to act, sing and dance.”

She said Putman was selected because it “has a lot of great character roles that the students can identify with.” And while the show features  six spelling bee contestants, there are many small roles, taking the cast up to 22.

One unique aspect of the show – even when it was on Broadway – is that four audience members are chosen to be contestants. In the M-A version, there will be different teachers fulfilling this role in each of show’s six performances.

At a recent rehearsal we asked the actors playing the spelling bee contestants what prompted them to audition for the musical. 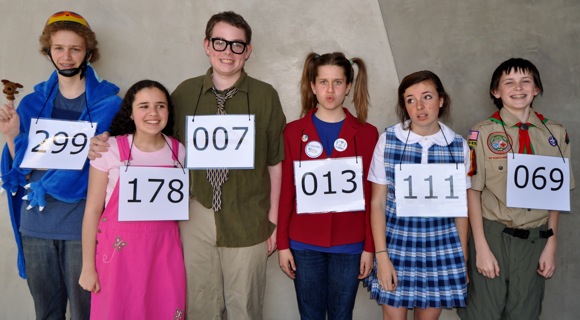 “My dad was getting mad at me for not doing anything with my life,” said #69, freshman Josh Weiner. “I’ve always been a dramatic person and liked singing, so this was perfect.”

“I’ve been doing theater my whole life,” said #111, freshman Rachel Fosnaugh. “One of the reasons I decided to come to M-A is because of the new Performing Arts Center.”

“I was part of M-A drama last year,” said #13 sophomore Maddie Napel. “I met a lot of great people. I’ve also been involved in theater most of my life, and this show is really fun.”

“I’m doing his because I can and because I didn’t have any other theater to do except school theater,” said #7, freshman Will Hanley.

“I started theater in 6th grade and knew I wanted  to become a member of M-A International Thespian Society,” said freshman #178 Maddie Rostami. “I thought it would be another opportunity to do theater with a great group.”

“I decided to do it because I had a lot fun in last year’s musical,” said #299, sophomore Matt Schertler. “I like being on stage and like singing.”

“Break a leg,” actors and musicians and tech crew! You’ve ALL worked so hard for months now. I know I’m biased but it’s going to be a fabulous show! Thanks for all the local business and community support, too!

We went Saturday night to “The 25th Annual Putnam County Spelling Bee” without very high expectations and knew no one in the cast, but had heard about this musical comedy and thought it would be a good way to spend a rainy evening in M-A’s new Center for Performing Arts. What a splendid surprise! I have seen several high school stage productions in my 67 years, but none to equal this one–truly outstanding. The script and music make for great entertainment, but only if the cast can make it come alive, and they most certainly did and with gusto. All the cast performed well, but the six with the juiciest parts–Josh Weiner, Will Hanley, Rachel Fosnaugh, Matt Schertler, Maddie Rostami and Maddie Napel–were spot-on in their interpretations of their quirky characters and their enthusiastic performances of the numerous demanding musical numbers. One slight negative: the percussion instrument decibels from the orchestra pit need to be slightly diminished so the audience can hear clearly all the clever lines in those musicals. Don’t miss this exhilarating production. BRAVO to the great cast and to Drama teacher Debra-Jean Zwicker-Sobrepena!

I just want to thank you, Mr. Jack-we ALL do- for taking the time to comment so eloquently after experiencing our musical two Saturday nights ago. I couldn’t have asked for a better, more thorough or more glowing review. You touched on so many aspects of the show and everyone– from the musicians to the tech crew to the actors and the director —felt appreciated and acknowledged. Even the one critique regarding the overly exuberant percussion was noted with interest and incorporated for the final three performances. Calling our show an “exhilarating production,” made us all smile from ear to ear! So, THANK YOU, Mr. Jack!