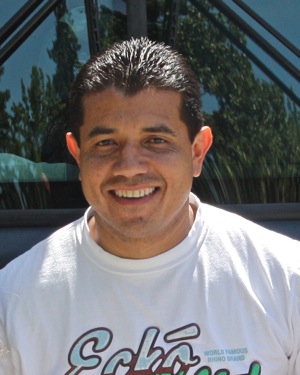 Three years ago, the Menlo Park City School District community received a gift, in the form of a brand new, state of the art school bus, and, more importantly, a one-in-a-million bus driver named Wilfin Morales.

From the start, when Wilfin welcomed nervous Kindergarteners with a warm smile, buckled them into their seats on the new bus, and let their parents come along for the ride, it was clear that he was someone special. To everyone touched by his kindness, unfailing gentleness, and infectious joy, Wilfin quickly grew to be more than a bus driver: He became a friend.

“Working with the kids is what I love most about my job,” he says. “I love the kids.” For kids and parents alike, the feeling is mutual!

In addition to safeguarding the kids of Encinal, Laurel, and Hillview schools, Wilfin works hard to care for his own family: his wife Lillian, a Physician’s Assistant in the OB-GYN department at Palo Alto Medical Foundation, and their two children, Kenia, 10, and Joncarlos, 8, both of whom attend Escondido School in Palo Alto.

Several days per week, after making his last run in MPCSD bus #1, Wilfin goes directly to Stanford, where he drives the Marguerite shuttle bus until late in the evening. He wants the best for his family, and right now, two jobs are necessary to provide for them. Wilfin hopes that will change in the future, but for now he works long hours during the week without complaint, and devotes his weekends to having fun with his wife and children.

Recently, the San Mateo County Office of Education acknowledged what school district parents and kids have long known — that Wilfin is the best of the best — and named him 2011 San Mateo County Classified School Employee of the Year. On top of this honor, Wilfin is a nominee for 2011 California Classified School Employee of the Year, and if he wins he’ll travel to Sacramento to meet Governor Brown.

“You all got me this award,” said Wilfin, referring to the bus families who support him.

I had the pleasure of seeing Wilfin when I escorted my two grandchildren to the bus stop a few months ago. Yes, he makes it a wonderful experience for everyone. I was so glad to see this acknowledgment.