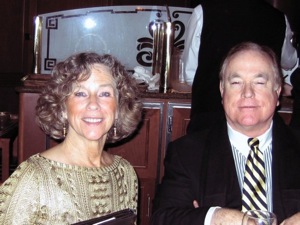 Occasionally we get a bit personal here on InMenlo, especially as it pertains to growing up on Hillview Drive, as this contributor did. It was a Wonder Years type existence, walking the short distance to Hillview School (then a K-8) and playing outside on the street with the neighbor kids until it got dark during the summer months.

Just before third grade, the Moffets moved in across the street — Flora Ann and Cliff joined by daughters Susan, Eleda, and Sally, who was my age. In high school Sally started dating one of the Lussier boys, Michael. That these semi-terrors on bikes, who would roar down Santa Cruz Avenue en mass from their home on Lemon, had a sister, Christine, was little noticed by us observers. They were always “the Lussier boys.”

Forty five years ago today, Sally and Michael eloped to Idaho, a state where they could 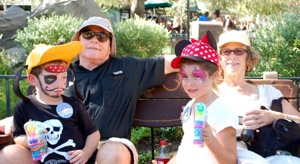 be legally married — this being in the era when a guy needed to be 21 in the state of California. For those of us who still immersed in more youthful pursuits, it seemed a bold step. So today we salute this raised in Menlo Park couple on their 45th wedding anniversary, parents of two children, Michael, Jr. and Kathleen, and grandparents of Eleda West and Ronan. Emails daughter Kathleen: “Miracle of miracles, they made it through and still choose to vacation together!”

Editor’s note: Are you celebrating an important milestone? Let us know: tips@inmenlo.com

Nice job! Who gave you those pictures? I am sure there are a few with my eyes open. I think!……. Yes 45 years of blisterly bliss.