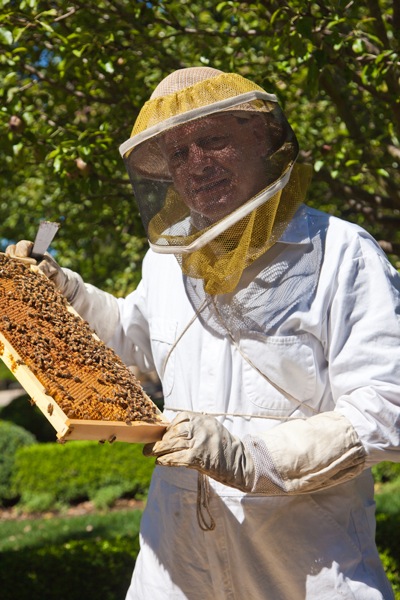 When it comes to beekeeping, just follow the buzz. That’s in essence how Dirk Kiehne, a relative newcomer to the profession, gets his customers.

Take the Atherton home where we recently met up with Dirk on his rounds of hives in local backyards. “A swarm landed on the porch, and the woman who lives here put them in a box herself,” he says. “But they only stayed for a few months. By then she was hooked, and a friend of hers whose hives I was tending told her about me.”

Dirk, a former software engineer, is a man clearly delighted with his new vocation. He’s also a walking encyclopedia of bee knowledge.

“In a mature hive at the height of summer, there are probably about 50,000 bees,” he says. “They are actually very peaceful — you can walk right up to them. They only become aggressive when you swat at them or if you bump into the hive.”

According to Dirk, bees live only about six weeks in the summer they have so much work to do.  “They like it between 90 and 97 degrees inside the hive,” he says.

As Dirk prepares to check the honey production in the hive, he burns a combination of eucalyptus barn and pine twigs. “Smoke calms bees down,” he explains. “It elicits an age old response when they still lived mainly in forests. You can herd them with smoke — they go into battle station mentality.” 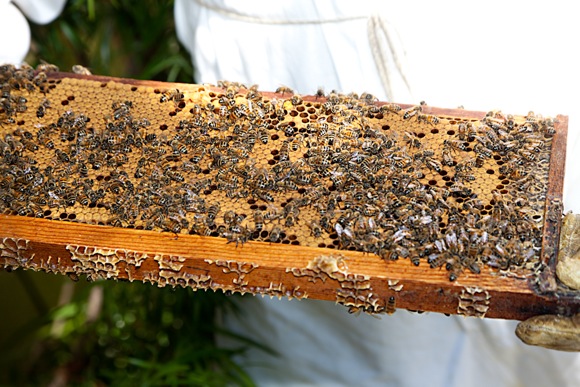 The fact that Dirk is a beekeeper today is the result of a chance encounter at the Menlo Park Farmers Market with honey seller Jim Talboy. “I was talking with him and he invited me to go out with him to gather honey. I was instantly captivated.”

Dirk took pains to examine the brood chamber while we watched. “This is just for the bees, not for harvesting,” he explains, continuing to talk about all the different jobs there are to do within a hive.

“The maids clean the hive. The undertakers drag dead bees out of the hives. The harvester bees gather nectar. The guard bees watch the entrances. Drones fertilize virgin queens.”

Like the bees’ jobs, a beekeeper’s garb is predictable — gloves, hat and veil, and white coveralls. Why white? “Bees don’t like big hairy, dark things like bears, so beekeepers wear white.”

I am looking for a cousin Dirk Kiehne whose parents immigrated to California back in the 1940ties. Parents are Wolfgang and Barbara. I am wondering if Dirk could be my cousin. Could you please forward my message to him? Thank you.
Best regards
Barbara Kiehne-Prein