Mike Schelp: Heeding his dad’s advice to be a man out standing in his field 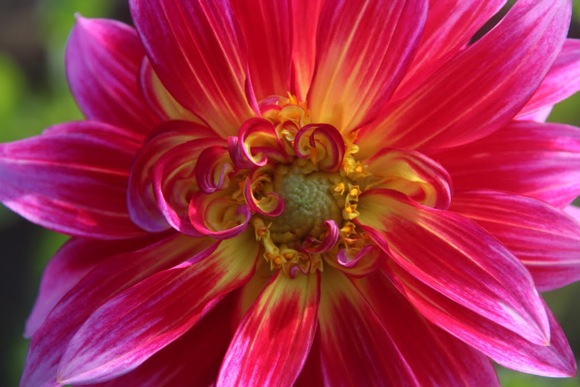 “Wow” is an accurate reaction when first spotting the huge, color-saturated dahlias that Mike Schelp and wife Martha Ketterer bring to the Menlo Park 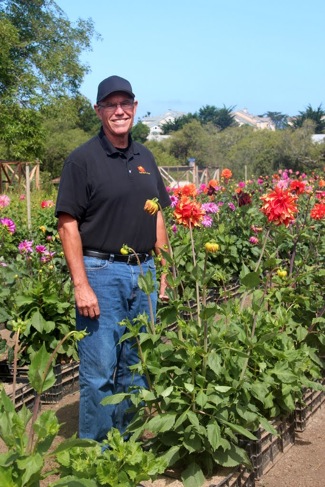 Farmers Market during the late summer months. Stationed usually  mid-market, the flowers are impossible to miss and nearly irresistible.

Mike and Martha grow their gigantic flowers on leased land near Half Moon Bay that they’ve named The Dahlia Farm. The commercial pursuit started in the backyard of their Moss Beach home. “It was Martha’s idea to grow dahlias in our cutting garden,” explains Mike, standing in his field of flowers. “We began by getting tubers from the San Francisco Dahlia Society.

“They were such a success she started taking them with her to work in San Francisco. One day she decided to take a few stems to a florist in the City. The owner took one look and said, ‘I’ll take everything you have.'” 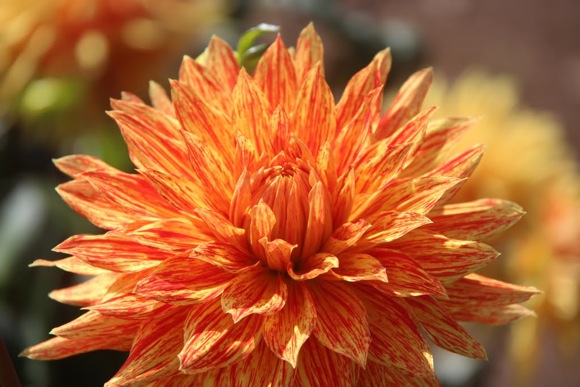 Today they grow 61 varieties. “We take a bit of a different approach than other commercial growers,” says Mike. “We go the the dahlia shows in August and make selections based on size, shape, and color.

“Of course, what you see at the shows is not always what you get. So it’s a bit of a trial and error to determine what will be the most successful. Because we have a lot of foggy days, the sun doesn’t wash out the colors as much, hence the intensity of color.” 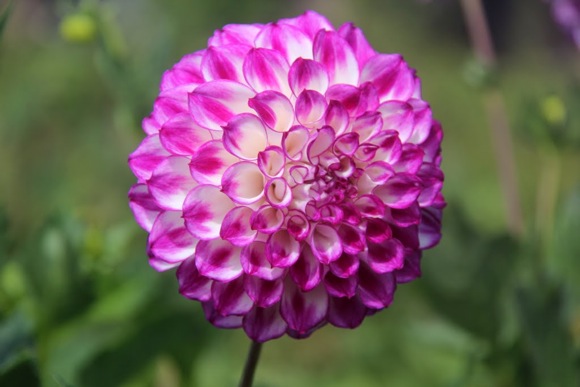 Menlo’s Farmers Market is the only market they sell at; the rest of their dahlias continue to be sold wholesale to City-based florists. They chose Menlo because it’s held on Sunday. Their flowers are cut only when ready, so the weekend day helps augment their weekday City deliveries. They’ll be at the Market this year through the end of  September.

Mike, who also is a coastside real estate broker, remains a bit mystified that, after many years working as an engineer, he’s now selling flowers. “I guess I’m finally heeding my father’s advice,” he says with a smile. “He told me to be a man out standing in my field.”

Is it possible to visit Mike and Martha’s Dahlia Farm?

Hi Mike: How are you? I lost your card with your number on it? I have a friend who is redoing a book on Bay Area garden sources. She is on National Parks board and is looking for great growers. Also, I need advise re Dahlia’s that would be good for pots, not for planting. Would actually love to visit your Half Moon Bay growing fields again. Always my best, Susan