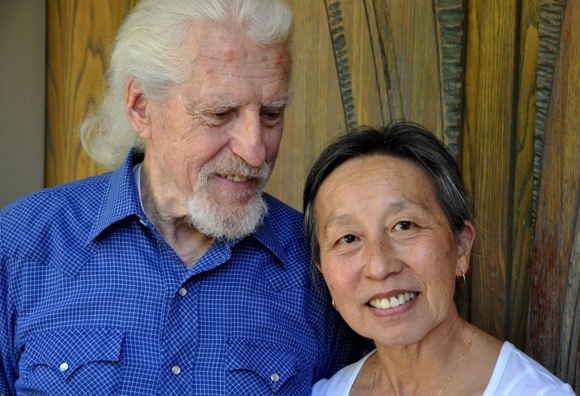 The challenge of photographing Ernst and Betty Meissner at their close-to-downtown home is finding them there at the same time. Such is their community service, which is being recognized by the Menlo Park Chamber of Commerce in the form of a 2011 Golden Acorn Award.

Downtown Menlo wouldn’t be what it is without Ernst’s contributions. He was previously recognized with a Golden Acorn in 1994. The same can be said for the Friends of the Menlo Park Library and Project Read, which Betty is actively involved in. In fact when we stopped by, she was trying to figure out how to juggle Ernst’s 80th birthday celebration with the Friends’ book sale. “I tried to get him to change the time but he really wanted a daytime garden party,” she says.

The couple have been married 38 years and resided in Menlo Park the entire time. “It’s kind of incredible,” said Betty. “Not only have we always lived here, it’s been within a one-mile radius.”

The Golden Acorn Awards will be given out at a banquet that will be held on Thursday, Sept. 22 at the Stanford Park Hotel. Tickets are $100 through the Chamber; the phone number is (650) 325-2818. Others being recognized this year include: