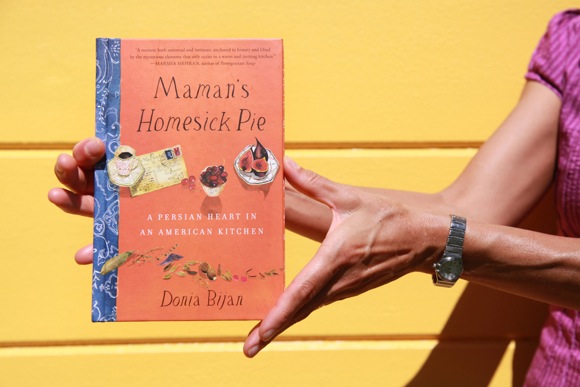 Locals who remember Donia Bijan best from her decade at the helm of L’Amie Donia in downtown Palo Alto might be a bit surprised to hear two of the three things that sustain her now that she’s been away from the restaurant business seven years.

“To stay balanced, I have to swim, I have to cook, and I have to write,” she said, recently over a lunch at her Menlo Park home.

Swimming happens in the company of other people early in the morning under the auspices of Tim Sheeper’s Menlo Masters program at Burgess Pool. “With Tim, every workout is new,” she said. “It keeps me sane.”

The cooking she does today is mainly for husband Mitchell Johnson and their son Luca. “I shop almost daily because I don’t necessarily have the vision to know what I’m going to make days ahead,” she said. “Both Mitchell and Luca are meat lovers, so I think of creative ways to use meat but in very small qualities.”

But we hadn’t come to her home to talk swimming or cooking. Instead, over a shared meal, we were there to learn about her first book Maman’s Homesick Pie: A Persian Heart in an American Kitchen due out October 11, which will coincide with an appearance at Kepler’s that evening at 7:00 pm. While we enjoyed lunch, she talked about how writing wasn’t really new to her:

“Any time I wrote a menu, I was writing. The menus were far more than a list of ingredients in a particular dish. I wanted the daily menu to read like poetry without being overly sentimental or floral.  A well thought out dish considers everything, just like a well thought out sentence.

“I always wanted to write. I may have put it on the back burner for a long time. When my Mom died, it gave me the impetus to start. I was writing because I was flocked with memories. For me it was a way of having her stay a little bit longer.” 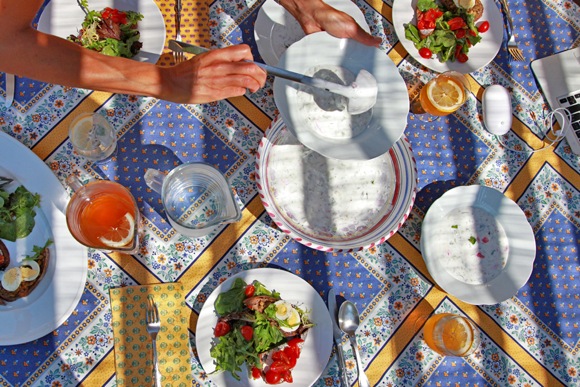 Donia’s parents fled Iran with their children during the Islamic revolution in 1978. “I had to imagine a bit what it felt for them to be exiled and start from square one,” she said. “The recipes I found in my Mom’s home were what we would think of as American food — brownies, casseroles, banana bread. It made her anxious not being tuned into the flavors of this nation.

“But she never really left behind the Persian culture, which values food and bringing family together. Everything revolves around your meal time. You have to always be ready for a party.”

Donia admits that her parents weren’t initially supportive when, during her junior year at Cal, she changed her major from pre-med to French and began to think of a career heading a kitchen. “I knew way before that I was going to be chef,” she recalled. “But I couldn’t say the word. My mother was the kind of person who believed if you’re going to do something, do it right. So after graduation, off to Le Cordon Bleu in Paris I went.”

Maman’s Homesick Pie mixes remembrances and recipes from her Mom, her French training, and her years at L’Amie Donia. “I started out just putting the memories down, thinking about my parents and what they had been through” Donia said.

Later in the fall, on Nov. 16, Donia will be holding a cooking class at Draegers centered around Thanksgiving. “The beginning of the book alludes to the importance of Thanksgiving,” she said. “It was so important to my Mom to do it right.”

Fascinating article. It sounds like a wonderful book. I’m buying it.