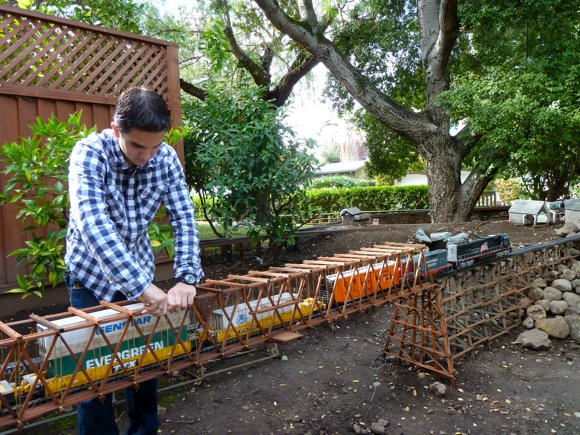 There have been some major renovations of the Camarillo Pacific Railroad since we first visited, none more spectacular than the new eight-foot bridge built by Colin Camarillo in memory of his good friend, Bryce Gilbert, who passed away last year. 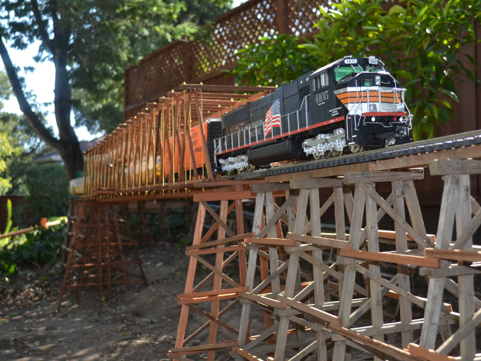 “Bryce’s father gave me a really special locomotive — there are only a few hundred in the world,” explained Colin as he showed us, and other visitors, the railroad’s various improvements. “But the size of the engine meant that I had to widen some of the curves.” 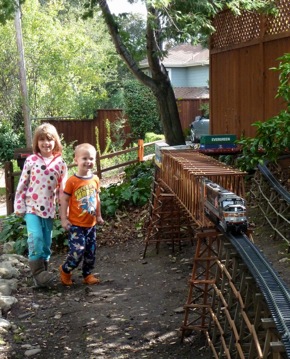 Colin did that and more. He wanted very much to keep Bryce’s memory alive; it was his friend who’d helped him build the railroad in the first place. He decided that there was no better way than to build a new bridge. He researched bridge styles on various model railway forums and settled on a Howe through truss.

“I liked its sophistication and elegance but that it was still largely conservative in design,” he said.

Colin believes the eight-foot span, which can hold 150 pounds, is the largest model railway bridge in existence. “At least I haven’t been able to find one longer than seven feet.”

The new structure is called the Bryce Gilbert Memorial Bridge, and Colin is working on finishing touches. He’ll rename his locomotive Engine Gilbert and plans to to place two figures under a light on a platform that extends from the bridge. “The light will always be on,” he said.

I knew Bryce and his family well. This was a wonderful tribute to him.

I’m Bryce’s cousin, Bret from Atlanta and this is awesome such a great idea! Thank you on behalf of his East Coast relatives. Maybe if we could contact Guinness World Records they could put it in the next edition! Thanks again Colin, hope we get the opportunity to meet some day!

Colin,
Bryce was so blessed to have you and your wonderful family in his life. Can’t wait to see the engine and bridge in action.

You are to be commended, Colin, for making so kind, creative, and magnificently thoughtful a gesture in remembrance of Bryce. Your handiwork is superb and the sturdy bridge you’ve built looks as attractive as it is structurally sound. A fitting gift for a fellow train enthusiast from a faithful friend! All aboard and all success with the continuing expansion of the Camarillo Pacific Line!

To all who have responded. I just viewed the article and I have a huge smile on my face, thank you. Bryce was like the little brother I never had and it was the least I could do for him and the Gilbert family. I have huge plans for potentially custom painting an entire passenger train with each of bryces family members names on it, but just have to get the proper funds! Again thank you thank you soo much for the kind words. He was the reason I am able to have such a large railroad and he was one of the few friends that loved to see what has come of such a small idea at first! 🙂

colin
i live in the willows. is it possible to see these? wonderfulk story, trains & tribute!

email me at camarillopacific@me.com and we can arrange a day/time!

You’re the best Colin. My bro was lucky to have you as a best friend. I can’t believe I didn’t see this site until now!