Perry Tree #2 continues to be center of a neighborhood 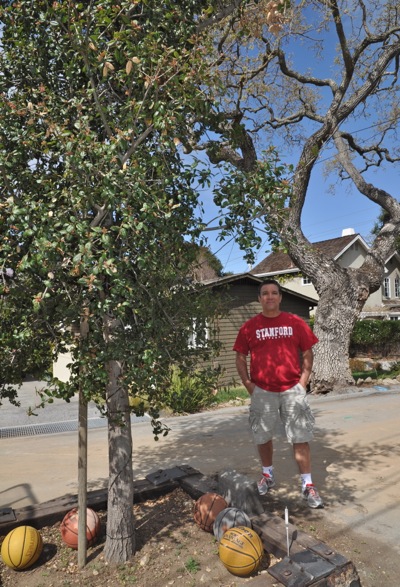 When the Valley Oak that had stood in the middle of Perry Lane (officially Avenue) for 200 years fell in January 2005, it took a lot of the once colorful neighborhood’s history with it. (Ah, if only a tree could talk!)

In the early 60s, the rustic cottages on the short block in the University Park section of unincorporated Menlo Park were the home to a group of bohemian artists and writers, including Ken Kesey who wrote One Flew Over the Cuckoo’s Nest while a resident. Legend has it that Tom Wolfe put a mattress in the big Valley Oak’s branches during a series of nocturnal acid trips.

The hippies moved on, replaced over the next decades by families who valued University Park’s friendly feel and the chance to participate in neighborhood events like the Friday Frolics and Halloween Parade. While no longer accommodating overnight guests, the big Valley Oak continued to provide a service, according to long time Perry Lane resident Jim Camarillo (pictured). “The fire department used to come down the street to see if it could maneuver the trucks around the tree without breaking things,” he recalled. 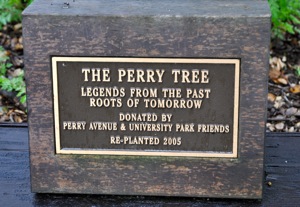 When the Valley Oak fell and was chopped apart, the neighborhood consensus was immediate — plant a replacement. A little stool with a can on top was placed where the tree once stood to collect donations. Before 2005 ended, a new tree, this time a Live Oak, which retains its leaves year round, was planted. A plaque commemorates both what was and what’s going to be.

On a recent visit, it was good to see the the new tree was also serving a utilitarian purpose, housing a bunch of basketballs ready for a pick up game.

I grew up on 8 Perry Lane until my dad got sick of Kesey’s buddies putting mattresses up in the tree and having pig roasts in the middle of the street. We moved to Oregon in around 1960.

Anyhow, I remember my mom telling me that her first date hit that tree with his car (would have been the late ’30s or early ’40s). I remember it well from my childhood and was sad to hear from an old family friend that it had fallen. Sort of sorry that they used a live oak instead of the same species. Year-round leaves or not, it really doesn’t maintain the “history” of Perry Lane all that year to change the type of tree. But I suppose I’m being picky.