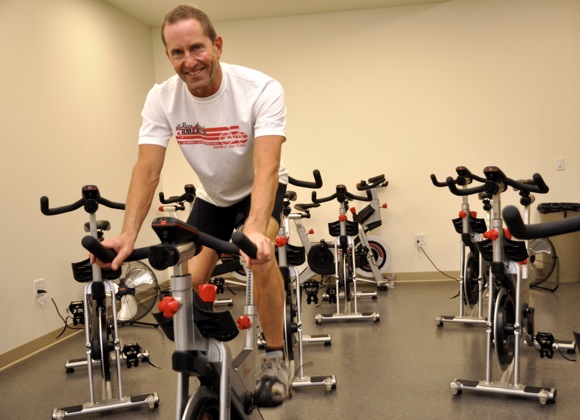 On Fridays, you’ll find Menlo Park resident Bill Kirsch teaching a spin class at the Arrillaga Family Gymnastics Center, a program offered through Menlo Swim and Sports. Given his obvious level of physical fitness, you might assume that he’s been “in the fitness game” awhile. And, that’s where you’d be wrong.

Yes, Bill has long been a cyclist. “Cycling was an early commute transportation choice for me,” he recalls. “I got my MBA from UCLA and commuted from Santa Monica. When I moved to the Bay Area, I discovered it was one of the best cycling areas in the world with a huge cycling community.”

But no, Bill’s profession puts him behind a desk and looking at a computer. “I founded Costella Kirsch, a small venture lending firm in 1986,” he says, “but I’ve always been community oriented. I live in the Allied Arts neighborhood now but lived in west Menlo when my kids were young and worked hard on making the stretch of the Alameda in Menlo more pedestrian friendly. Guess you could say I have more passion about these kinds of issues than anything else.”

In 1994, Bill started swimming with Menlo Masters, one of Tim Sheeper’s fitness programs held at Burgess Pool in Menlo Park. “Tim’s strength is the tremendous community he builds around his programs,” says Bill. “When he opened the spinning studio, I told him I’d be interested in teaching. I now teach a regular Friday class and fill in as needed.

“Leading a spinning class is demanding in that you have to be prepared. The music play list must be ready. Plus, you’re participating in your own workout. You need to be ‘on.’  You need to show up both mentally and physically.”

Bill is a relatively new teacher, having joined Tim’s adult fitness schedule last summer. But, he’s committed: “It’s fun to be part of a high energy, positive group. That’s what Tim has built. It’s also great for me. It gets me out from behind my desk and breaks up my day every Friday!”