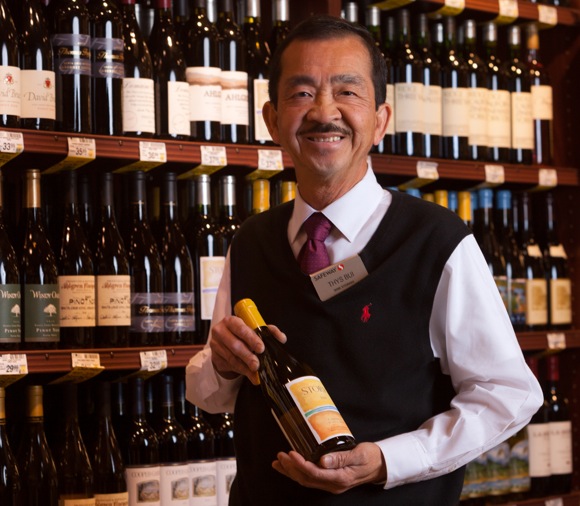 Nestled among the wines displayed by varietals and regions at the Safeway on El Camino in Menlo Park are two sections of very local wines overseen by the store’s wine steward Thys Bui.

“I’ve been in this position since the rebuilt store opened in 2007 and was liquor manager at the old store,” explains Thys. “I work with corporate in selecting wines from the Santa Cruz Mountain appellation. Some of the wines are pre-approved from corporate. However, from time to time Phillip [Fernandez of the NorCal Division] would refer a wine distributor to me to see which wine I would pick for our store after tasting and reviewing its characteristics. Once I identify a wine that I think will interest customers, I submit a request for authorization to bring those local wines to the store based on my knowledge.”

Some of the wines, like David Bruce, Fogarty, and Ridge, will be familiar to many wine buyers. But less well known Santa Cruz Mountain wineries such as E16, Hillcrest Terrace, and Salamander are also included. While the selection showcases a variety of grapes including Zinfandel and Syrah, Thys is partial to the local Chardonnays and Pinot Noirs. “The local Pinot is similar to what is produced in Burgundy, but there’s a hint of spices,” he says. “There are four different appellations for the Chardonnay grapes, and each has its own distinct character.”

Thys grew up in France drinking wine as a child, as many French youngsters do, and remembers, in particular, wines produced in the Luberon region. He worked early in his career in the tech sector as a systems analyst but transitioned to wine steward, first at the now closed Gervais Restaurant in Saratoga.

He says he gets the greatest satisfaction helping customers pick out wine, in particular, for a special occasion. “I ask them how many guests they’re having and what their price range is,” he says. “Then I find out what style of wine they favor. That helps me give them the right suggestion. When they come in after the event and thank me, well that’s what makes my job great!”

So cool to see an article on this famous great guy!

Definitely this Safeway has one of the best wine’s choices of the area thanks to him.

William – I would have to second your opinion! Thys certainly knows his wine and it’s great to see him in action and helping to teach/introduce wine-os to new great selections!

Thanks William and Dahlia for your sincere opinions.

From an employee perspective Safeway is a great company to work for!