Piles of shoes shuffle off to non-profit, thanks to efforts by local family and Fleet Feet in downtown Menlo Park 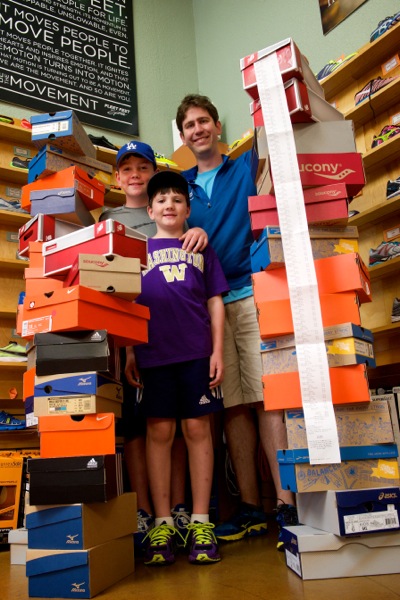 This is a story about how one pair of shoes led to another and another — 92 pairs in fact. That’s the number that the Collins family of Menlo Park donated recently to My New Red Shoes.

“Family” is the operative word. “We believe that the way to create a legacy of altruism is to involve the whole family,” said Kristine Collins (the mom). “We were looking for a project, and one day we were buying shoes for the boys, and the idea popped into our mind to buy an extra pair of shoes. Then last year we had shoes piling up in the garage, and someone suggested donating them to My New Red Shoes.”

At this point, our story shifts to Fleet Feet in Menlo Park, and the involvement of employee David Lewin-Rowen. David, who grow up in Menlo Park and is back in town after attending American University, heard that a family was in the market for shoes and did some digging at the store. He unearthed 75 pairs of shoes.

“What they [the Collins] did was rather amazing to the staff here,” said David.  “The shoes were on clearance at the store after our annual Connoisseurs Market sale, and we dropped the price even further because it was such a great cause.”

Adam, age 8, commented that he tried to picture a face for every pair of shoes. Added his 11-year-old brother, Ian: “I like the idea that the kids get shoes that fit them.”

For her part, Kristine wanted to make sure to give a particular shout out to David: “He was so helpful to us. He really connected with the boys and the project.”

Way to go, Collins family! Our community is so fortunate to have such generous, enterprising families like yours!

So privileged to know this family and the two boys involved in this project! Way to go Ian and Adam- what a great way to be leaders in the community!

Good going Collin’s family and David!!!! Yeah for the children. I work with My New Red Shoes and it is a great and very dedicated organization. I have seen the many happy and very grateful faces of the children in need. You did an awesome job! ALL OF YOU!
Sincerely and with much respect, Sandra Sweet